Canon’s Rebel series of DSLR cameras has been extremely popular for years, and the Rebel T5i is the second latest version to hit the market (the Rebel T6i was released last year). This camera is great for beginners with easy-to-use functionality and produces impressive stills and videos. Compared to the older Canon T4i, the biggest upgrade is to the new 18-55mm STM kit lens, which has continuous live autofocus for smooth and silent video (the old kit lens has a tendency to hunt). Below are our picks for the best lenses for the Canon Rebel T5i, from the kit lenses to wide-angle and telephoto zoom. 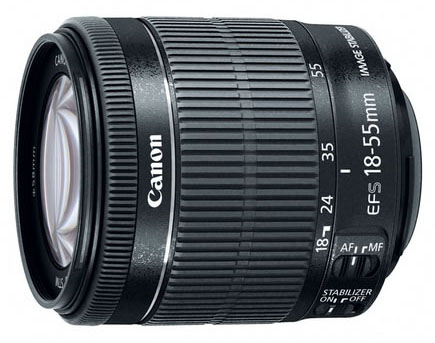 Weight: 7.2 oz.
Max Aperture: f/3.5
What we like: Smooth and quiet video.
What we don't: Some distortion at the wide end.

The 18-55mm STM lens offered with the Canon T5i is a significant upgrade from the 18-55mm kit lens offered with the T4i and T3i. Both have image stabilization, but the newer version has better optical performance and STM, or Stepping Motor technology. For those who frequently shoot video, the STM motor performs far better for video than USM motors on other Canon lenses. It’s smoother and quieter, making the T5i a great video camera for the price.
See the Canon 18-55mm Kit 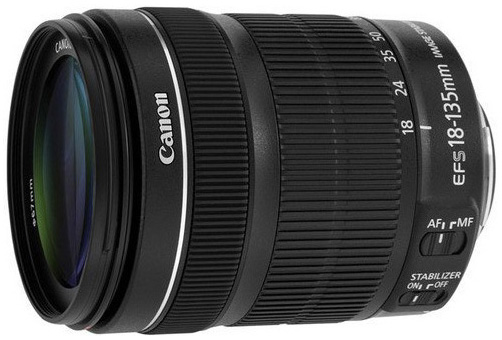 The Canon 18-135mm STM is a terrific lens that captures sharp images, is extraordinarily quiet, and features continuous live autofocus for video. It also has a considerably longer zoom range than the Canon 18-55mm above covering you all the way to medium telephoto. Another factor when considering the 18-135mm STM is that the lens is a great value as part of the kit—it's current $549 on its own and therefore a savings of around $350 with the camera.
See the Canon 18-135mm Kit 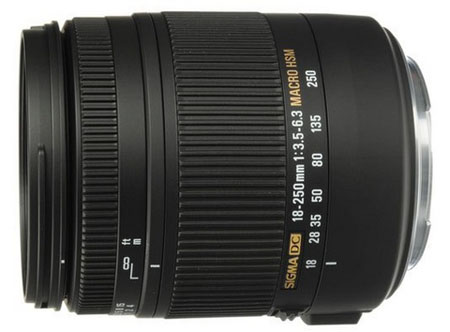 Weight: 16.6 oz.
Max Aperture: f/3.5
What we like: A great value a long zoom range.
What we don't: Softness and questionable construction.

For those on a budget, the Sigma 18-250mm Macro OS is an economical all-in-one lens to pair with the Canon T5i. It’s hundreds of dollars less than of the Canon 18-200mm below, a lens that we don’t love in the first place. What are the weaknesses of the Sigma 18-250mm? First, it doesn’t shoot particularly well in low light, especially at the long end (it does come with Sigma’s Optical Stabilization). Second, the composite material used in the lens barrel isn’t quite as durable as a harder plastic or metal. Third, the lens has more softness in the corners than most Canon Lenses. But given the price, it’s a very viable all-in-one option for those on a budget.
See the Sigma 18-250mm 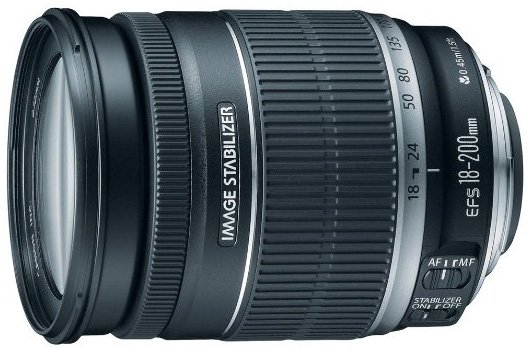 Weight: 21 oz.
Max Aperture: f/3.5
What we like: Versatile and good optics.
What we don't: Autofocus and some distortion at the ends.

The Canon 18-200mm IS is a versatile lens designed to go head-to-head with the popular Nikon 18-200mm. The optical performance of the Canon 18-200mm is solid overall, but one notable quirk is that the manual focus ring turns when autofocus is in use (better watch your hands). All things considered, although this lens was released only five years ago in 2009, we would like to see either an 18-300mm option like Nikon, or a second version of this lens without the focus issue.
See the Canon 18-200mm 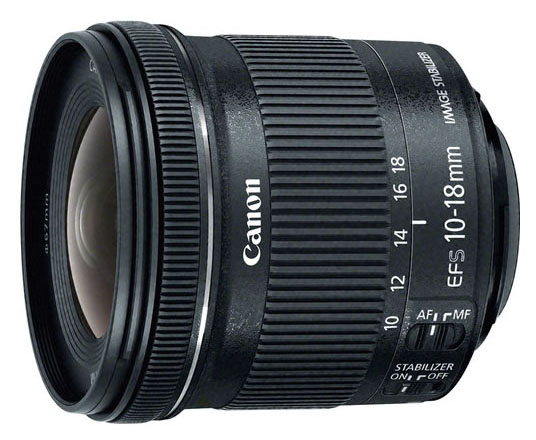 Weight: 8.5 oz.
Max aperture: f/4
What we like: Lightweight and sharp.
What we don't: Plastic construction.

Released in 2014, Canon hit it out of the park with the 10-18mm f/4.5-5.6 IS STM, finally satisfying those who don’t want to spend big bucks on a wide-angle lens. The 10-18mm is sharp, light, exceptionally cheap for a wide-angle zoom, and has a quiet STM motor that is great for shooting video. With a useful focal length range of 16-28.8mm on a 35mm camera, this lens is a winner in our book. The maximum aperture of f/4-5.6 isn’t optimal when natural light is low, but the lens does have four stops of image stabilization to help. For wide-angle specialists, the Canon 10-22mm below still is a viable option, albeit a pricey one.
See the Canon 10-18mm STM​ 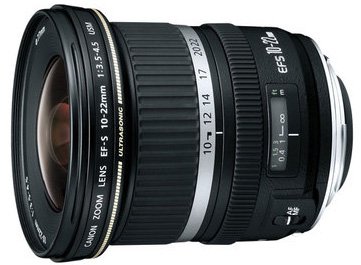 From an image quality standpoint, the Canon 10-22mm USM is slightly superior to the 10-18mm lens above. The biggest differences are low light performance, where the 10-22mm is faster, and the extra reach at 22mm (equivalent to a 35mm normal field of view). However, it’s now a whole lot tougher to pick the 10-22mm given the large disparity in price. If you value the wider maximum aperture or extra zoom, go with the 10-22mm. But for most photographers including amateurs looking for a good wide-angle walk-around lens, the new 10-18mm is a better value and shoots better video with its STM motor.
See the Canon 10-22mm USM

Weight: 4.6 oz.
Max Aperture: f/2.8
What we like: Video quality and compact design.
What we don't: 40mm isn't the most commonly used focal length. 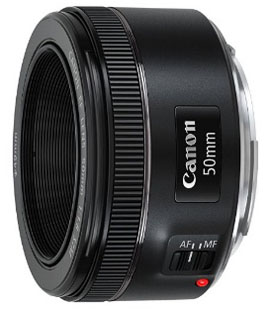 The 50mm f/1.8 is one of the best values of any Canon lens: it’s sharp, lightweight, and cheap. The body of the lens is constructed mostly of plastic—the glass is high quality—but the optics are impressive for the price and it’s a fun lens to have in your bag. If you plan on taking people photos or anything indoors, the low light performance and bokeh will noticeably outperform either of the kit lenses at 50mm. For true pro-level photos, the Canon 50mm f/1.4 is even faster, although that lens arguably is overkill on the T5i.
See the Canon 50mm STM 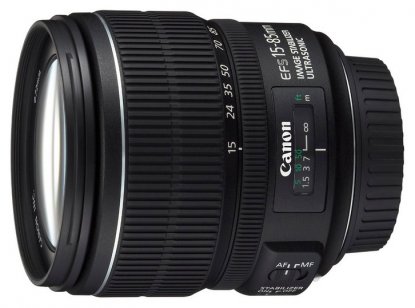 The Canon 15-85mm f/3.5-5.6 is a premium APS-C lens. Instead of carrying around and switching out multiple primes, this lens covers an impressive spectrum of focal lengths from wide-angle to medium telephoto—it’s equivalent to 24-136mm on a 35mm camera. Compared to the 18-55mm STM kit lens above, you get extra wide-angle capability and this lens has a nifty manual focus override function. The 15-85mm is a pricey lens, but we like it for travel and portraiture.
See the Canon 15-85mm USM 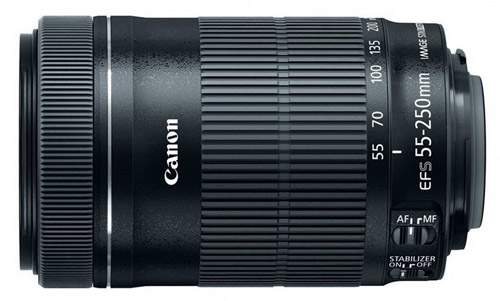 Weight: 13.3 oz.
Max Aperture: f/4
What we like: Good autofocus for a telephoto zoom.
What we don't: Low light performance.

Canon recently discontinued its older 55-250mm f/4.0-5.6 IS II in favor of this STM version. The changes are positive: the new lens is about the same price but has better optical performance including a stepping motor for smooth focusing. All in all, we think it’s the best telephoto zoom for APS-C cameras like the Rebel T5i and a great lens to have in your bag.
See the Canon 55-250mm STM 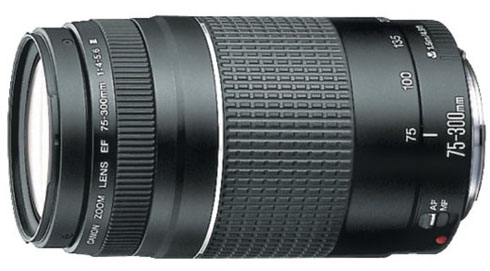 Weight: 17 oz.
Max aperture: f/4
What we like: Inexpensive and long zoom range.
What we don’t: No image stabilization.

Assuming that almost everyone gets a kit lens with their Canon T5i, it makes a lot of sense to add a telephoto for a complete set-up. In this category we really like the 75-300mm f/4-5.6. It’s inexpensive, reasonably sharp, and has good optics in normal light. It’s true that the autofocus can be slow and low light performance is limited (note: this lens does not have image stabilization), but for people who shoot telephoto on occasion and don’t want to break the bank to do so, this is a nice option. For comparison, the 70-300mm f/4-5.6 with image stabilization is $450, or more than double the cost.
See the Canon 75-300mm

Our Dream Camera Bag for the Canon Rebel T5i

The Canon Rebel T5i currently is priced the same for the body only as it is with the 18-55mm STM lens, so for those buying the camera, it’s a no-brainer to get the kit. All things considered, the 18-55mm STM is the more economical option but we prefer the 18-135mm STM kit. With the added reach you get much more versatility, allowing for a wider range of portraits and travel shots without the need for multiple lenses. Aside from sporadic telephoto images, the 18-135mm likely will not come off your T5i very often.

The Canon 10-18mm f/4.5-5.6 STM is our favorite budget wide-angle lens and a great addition for those who shoot landscape photography. On the other side of the aisle from Nikon, you would have to pay nearly $900 for Nikon’s 10-24mm f/3.5-4.5, but Canon came to the plate in a big way with a plastic wide-angle lens designed for amateur photographers. You can always upgrade if you end up pursuing wide-angle photography more seriously down the road, but the 10-18mm is an awesome opportunity to get your foot in the door in an otherwise pricey market.

If you pick up the Canon 18-135mm STM, we don’t see much of a need for a mid-range prime. It’s true that the 50mm f/1.8 STM is faster than the kit lens, but it’s only necessary if you plan on shooting at this focal length frequently. For those just getting started with the T5i, we recommend learning and experimenting with the kit lens and adding a prime down the road. If you do want a prime right off the bat, the “nifty fifty” would be the one.

A fun and reasonably priced telephoto lens for the T5i is the Canon 75-300mm f/4-5.6 III. Many people complain about the slow autofocus, which generally is true, and this lens isn't all that great in low light either with a maximum aperture range of f/4-5.6. But we love the equivalent zoom range of 120-480mm, which compliments the kit lenses nicely and gives you some serious zoom reach at under $200. Personally, we don’t shoot telephoto all that often but still want the option in our bag, and this lens serves exactly that purpose.

You may notice different acronyms at the end of Canon lens descriptions, which refer to the autofocus motors. STM (Stepping Motor) lenses are a relatively recent addition and designed with smooth and silent video focus in mind, and you’ll notice them offered in kits with many of Canon’s APS-C cameras like the Rebel T5i. Ultrasonic Motor (USM) lenses generally are fast and accurate for still photography but are louder and hunt more when shooting video. Depending on which types of shooting you do most, you’ll want to keep this distinction in mind. The truth is that STM lenses do a fine job when shooting stills for most people—serious action photographers may disagree—but the Rebel series isn’t really designed for them in the first place.

It’s worth noting that Canon has released a new “Nano USM” motor for EF-S lenses like the 18-135mm f/3.5-5.6, and we may see that technology trickle down in the future. Essentially, Nano USM is designed to offer the best of both worlds: smooth and silent focus for videos, and fast and accurate focus for stills. Again, this lens isn’t offered in a kit with the T5i (it’s currently $599 on its own, which is nearly the cost of the camera). You can find it in a kit with the enthusiast 80D. 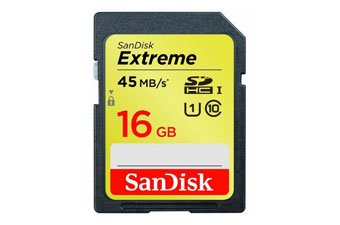 The Rebel T5i—the second newest in Canon's popular line of entry-level digital SLRs—holds one Secure Digital (SD) format memory card. Below are the best SD memory cards to pair with the Canon T5i, current for 2015... 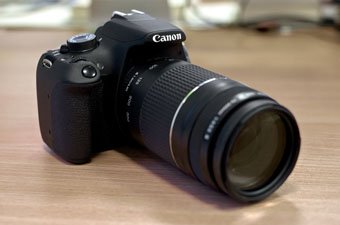 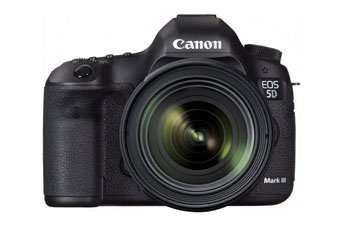