Church bells tolling far down in the valley, accompanied by the tinkling of much smaller replicas dangling from the throats of sheep grazing upslope, and the gurgling of a nearby stream—sounds of the GR 10, the hiking trail stretching across the southern border of France through the Pyrenees from the Atlantic to the Mediterranean. And, in early June, the visuals rival the auditory—a centuries-old sheepherder’s stone refuge in the high alpine valley surrounded by indigo blue gentians, bright yellow buttercups and remnants of winter snow. This trail is a trekker’s dream, regardless of your approach to a hiking holiday. 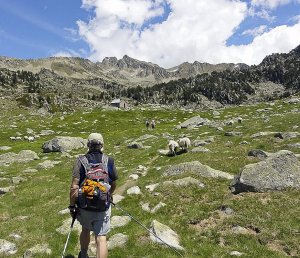 Some crazy folk tackle the entire length in one bold push, setting aside more than 50 days and trudging up 157,000 feet of ascent to cover the 538 mile distance. But, most of those committed to hiking the entire route often do so in several trips. Thru-hikers can travel light: inexpensive accommodation is available in mountain refuges or gites (hostels), which eliminates the need to camp. And because the route travels through many villages, resupply is almost never a problem.

Our group, however, opted for a less ambitious approach, tackling six separate segments in the Gavarnie region (a World Heritage site in the Haute Pyrenees department of southwestern France) on leisurely day hikes. Distances ranged from ten to thirteen miles allowing plenty of time for photos and proper French picnics along the way. We utilized a couple of bus/taxi ferries to and from more distant trailheads, but most of our hikes started right outside our door. Nights were spent in cozy village hotels. A glass of wine accompanied each post-hike bath (this is France!) and hearty dinners followed. Evenings closed tucked under a down comforter listening to the night noises through an open window.  And thinking, tomorrow more of the same....

Planning a hiking trip along the GR 10 is relatively straightforward. The Institut Géographique National (French National Geographic Institute), or IGN, publishes a series of maps, the Series Bleue (Blue Series), covering all of France at a scale of 1:25,000 (American hikers are familiar with the similar USGS topo maps, which use a 1:24,000 scale). And, the Fédération Francaise de la Randonnée Pédestre (French Long-distance Hiking Federation) uses map sections from the Series Bleue in their excellent series of GR 10 trail guides, the FFRP Topoguides. These guides are only available in French, but basic tourist French is adequate to navigate through them. 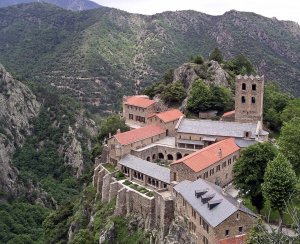 There are also several guide books written in English, which prove to be useful in selecting an area of interest before investing in the more expensive small scale maps and guides. Self-guided hiking services can also be used to help with logistics: luggage moving, taxis, hotels and route selection. Bredeson Outdoor Adventures assisted us and it was a pleasure to work with them. Also, individual hotels are a great help in arranging taxis (usually a nephew or cousin) and wading through bus schedules. And there is the usual treasure trove of information available online.

Before or after your hiking holiday, be sure to save enough time to visit the Grotte de Niaux (near Foix) to see the 15,000 year old cave art and to scramble up to the ruins of some of the magnificent Cathar castles in neighboring Languedoc.

The letters 'GR': GR stands for Grande Randonnée, meaning “long walk” in French. A number of long-distance trails in France have the designation 'GR,' but the GR10 through the Pyrenees is thought to be the most scenic
Starting points: Hendaye on the Atlantic coast; Banyuls-sur-Mer on the Mediterranean coast (the GR 10 can be walked in either direction but most hikers start on the Atlantic side)
Total distance: 538 miles (866 kilometers)
Time required: 40–50 days for the entire GR 10, but most hikers opt for shorter sections
When to go: June through September (the peak of the summer can get uncomfortably hot)
Difficulty: Moderate
Accommodations: Basic mountain refuges, small hotels, and camping (only a short section in the Ariège requires camping)

The Pyrenean Haute Route has the same starting and ending points as France’s GR 10, but the HRP frequently crosses the border between France and Spain to achieve the highest mountain trail. The conditions vary from year to year, but the HRP has sections of steep scrambling and snowfields and should only be attempted by those with sufficient wilderness experience. Those who make the trip will be rewarded with untouched backcountry and wide-ranging views of the Pyrenees throughout. For further information, Cicerone publishes guidebooks on the GR 10, GR 11, and the HRP.

Based on the success of France’s GR 10, Spain has developed a parallel trail with a simlar name, the GR 11, running from the Atlantic to the Mediterranean on the Spanish side of the Pyrenees (it briefly crosses into France near Candanchu). The GR 11 is less developed than its French counterpart, consisting of a series of localized trails with fewer villages along the route. Camping is often required. However, the Spanish version is finding its footing as a high-level trek and provides an adventurous alternative to the GR 10.

About the Author: Susan Funk has spent much of her life exploring the outdoors, including British Columbia, New Zealand, Nepal, China, Vietnam, Spain, and Greece. Her favorite adventures, however, are those closest to her Minneapolis home in Minnesota's Boundary Waters and Wisconsin's Northwoods. A former lawyer and consultant, Susan is also the author of the modern mystery Bone Flour set in the upper Midwest.