Handmade climbing gear and southern values, deep in the hills of Appalachia 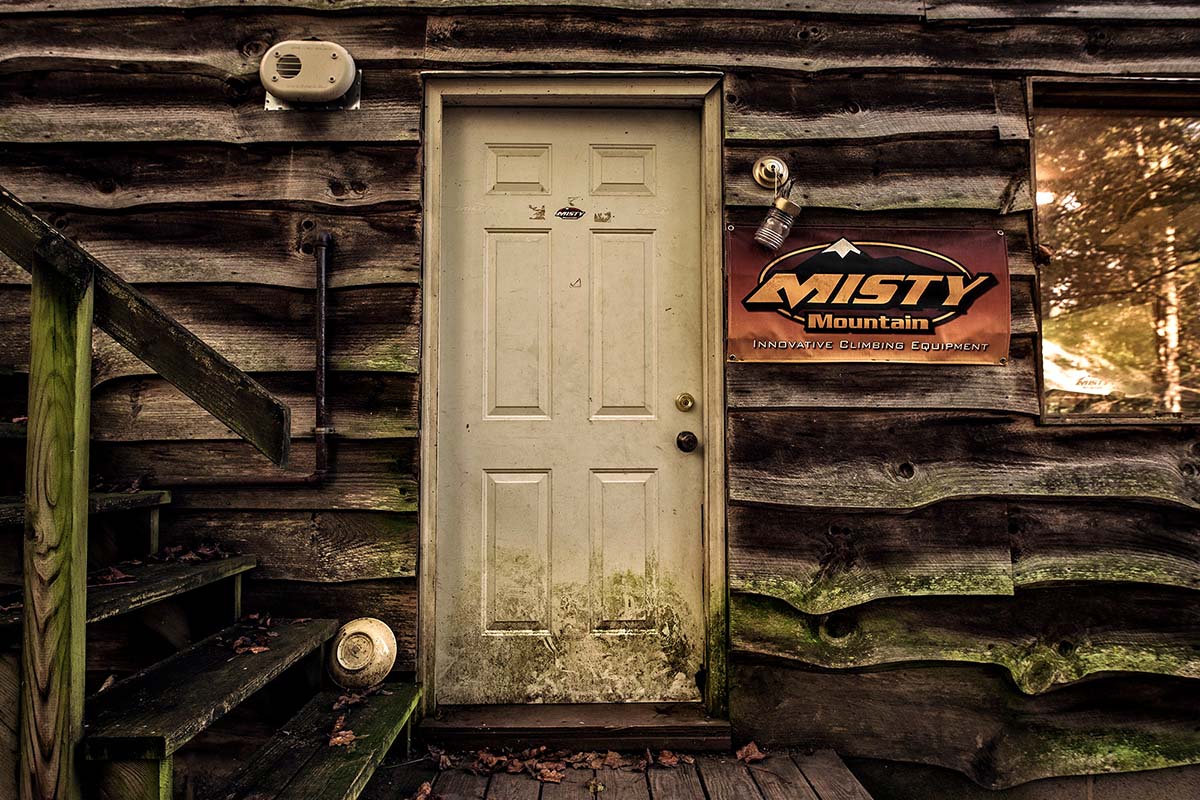 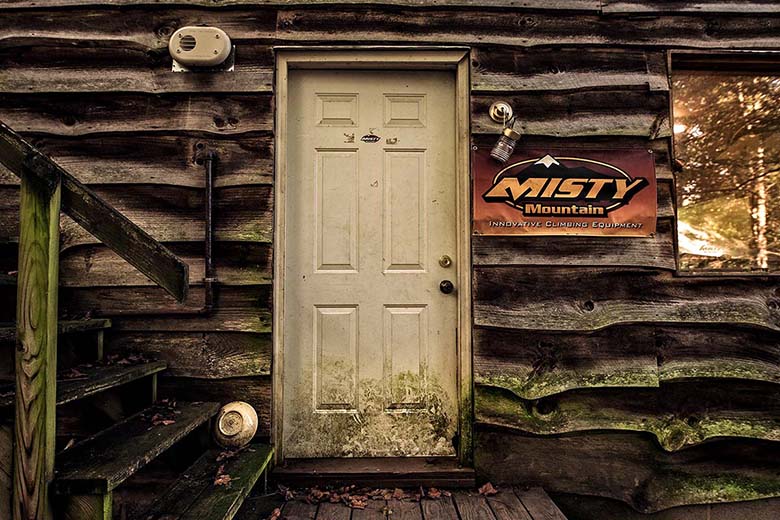 Misty Mountain's headquarters in the hills of Western North Carolina is not the kind of place you just stumble upon. It's the kind of place you set off to find. And when you arrive, you'll be treated to a classic Appalachian red-carpet welcome: pavement turning to gravel as the road winds further and further away from town, across a low water bridge, into a forest thick with underbrush. A large building in the distance, florescent green moss creeping up its roughhewn sideboards, rays of sunlight bouncing off the upstairs windows. And a sign on the left—strategically placed at the point where many begin to question their whereabouts—with the words Misty Mountain, Innovative Climbing Equipment displayed in bright orange. 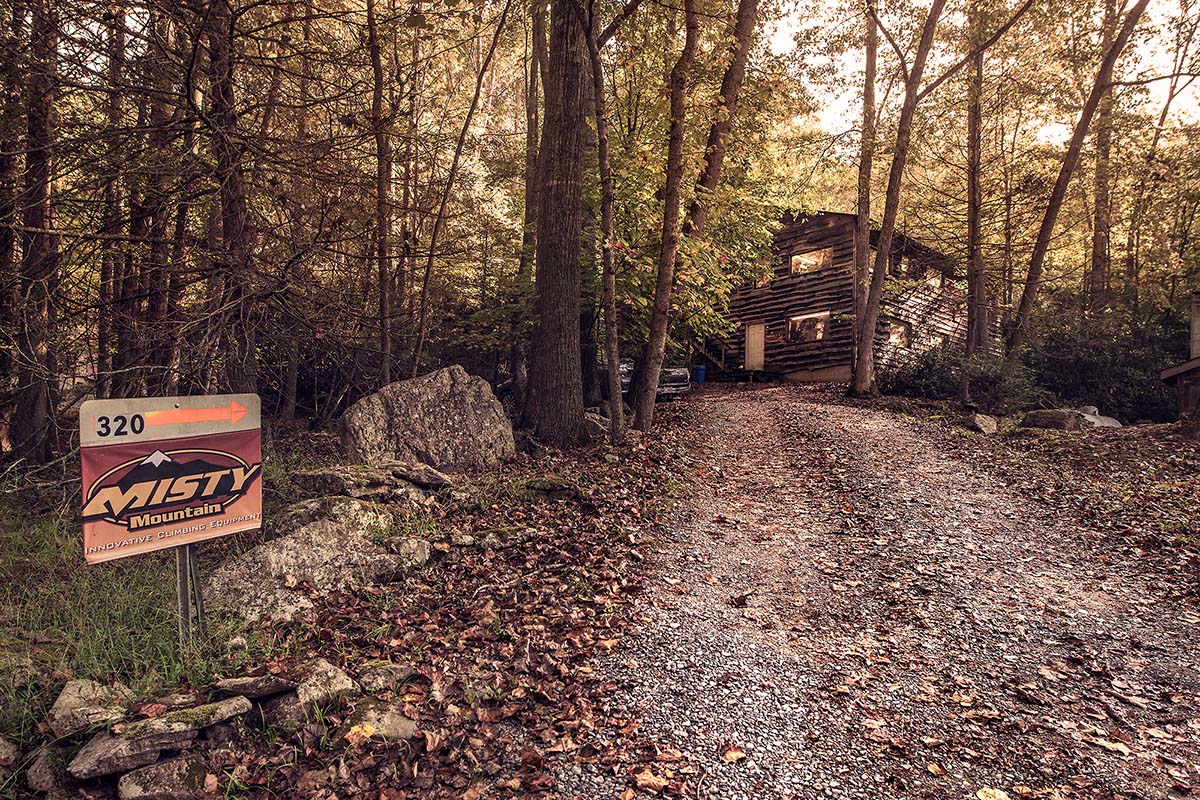 In these forested hills, you would think that progress is long gone in the rearview mirror. This is not Boulder, Salt Lake City, or even Chattanooga. This is Valle Crucis, North Carolina, a community that most climbers have never heard of, down a road that most would consider the definition of "backwoods." In short, this is not the kind of place you'd think to find the headquarters of a thriving outdoor company. 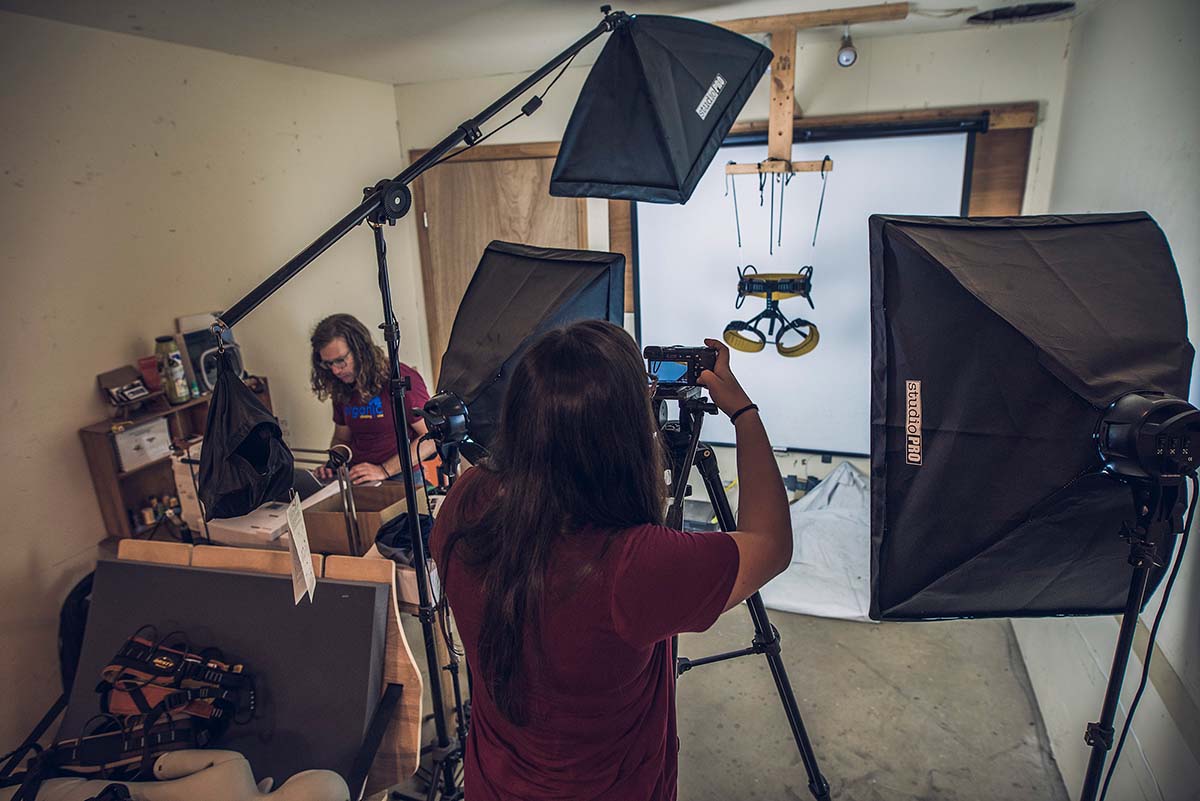 Misty Mountain Threadworks might not be the biggest name in climbing gear, but they're well-known for their quality lineup of soft goods. One might go so far as to say that in terms of harnesses, they're an industry leader. Misty Mountain harnesses are incredibly comfortable, thoughtfully designed, and ridiculously well-made. At any given crag in the southeast, a healthy percentage of climbers will be wearing one and likely will sing its praises if you ask. And Misty Mountain doesn't exclude anyone from their customer base, driven by the belief that the world would be a better place if everyone went climbing. They produce XXXL models, adaptive designs for wheelchair athletes, custom sizes and features—all handmade right in the hills of western North Carolina, USA. 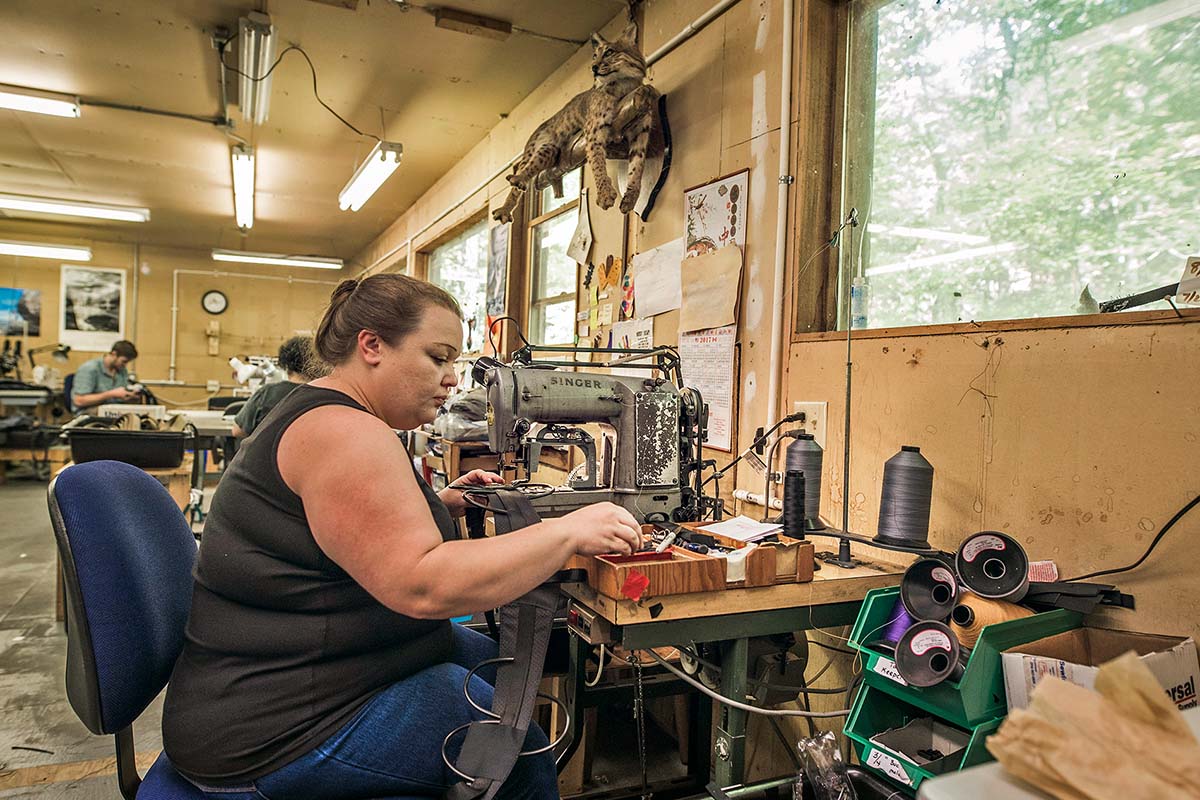 The climbing in North Carolina is stout. Granite domes hide amongst rolling hills, divulging their whereabouts only to those who care to look. Bolts get chopped the day after being placed; 20-foot runouts are not uncommon. A ground-up ethic permeates the state. If you want to climb hard, you go to the Red or the New River Gorges nearby, where you'll find international communities and professional climbers every spring and fall. If you're in search of bigger mountains, you go west. But if you want bold climbing, enticing history, and off-the-radar adventure, North Carolina might be as good as it gets. 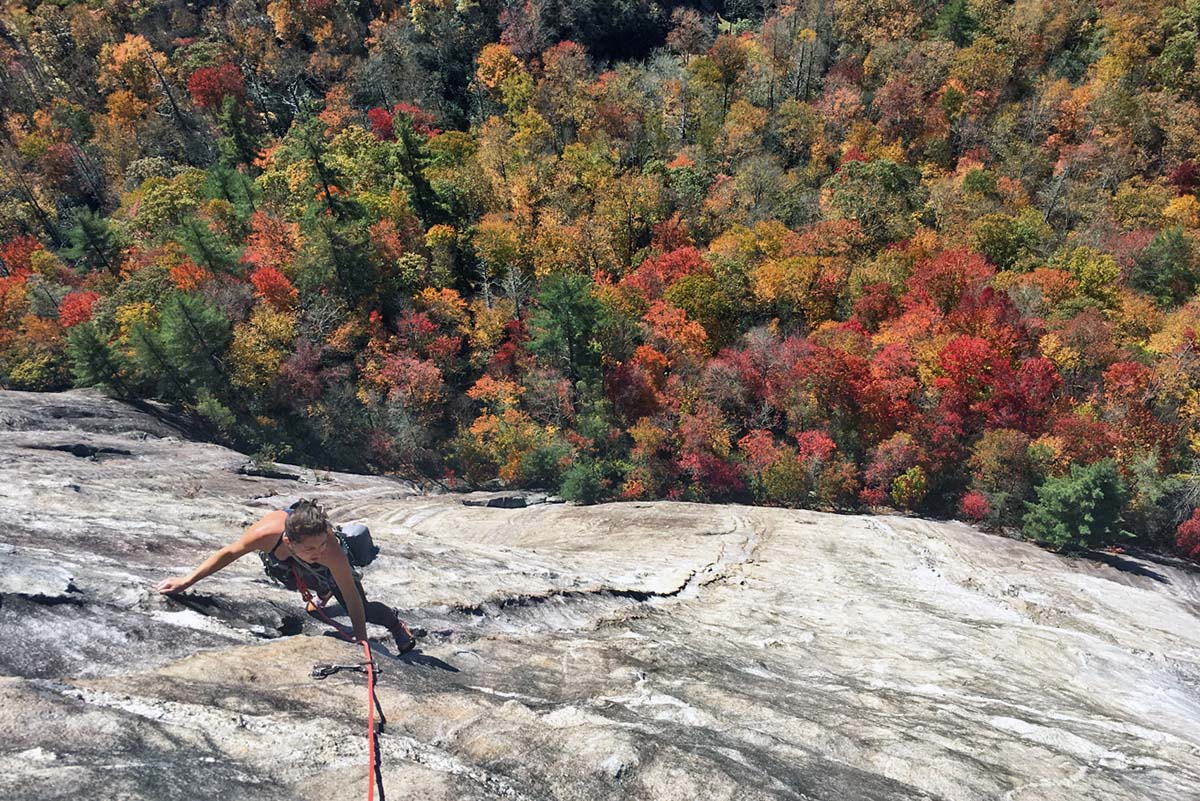 Woody Keen first started making harnesses at the age of 17, staying late after his shift at the local gear shop to use the sewing machine in the back room. Following his graduation from Appalachian State University in Boone, NC, Woody became the head climbing instructor at the nearby Outward Bound school. In his spare time, he continued to hone his craft, designing and building harnesses at night in his garage. Unlike swami belts that were typical of the time, Woody's designs had buckles rather than knots, making them one of, if not the, first adjustable harnesses ever made. A few years later, in 1985, Misty Mountain was officially born, and four years later, Goose—a childhood friend of Woody's—joined the operation. It was then, in 1989, the same year that both Arc'teryx and Black Diamond Equipment were founded, that the duo moved their production into the 7,000-square-foot moss-covered building, across the low water bridge and up the gravel road. 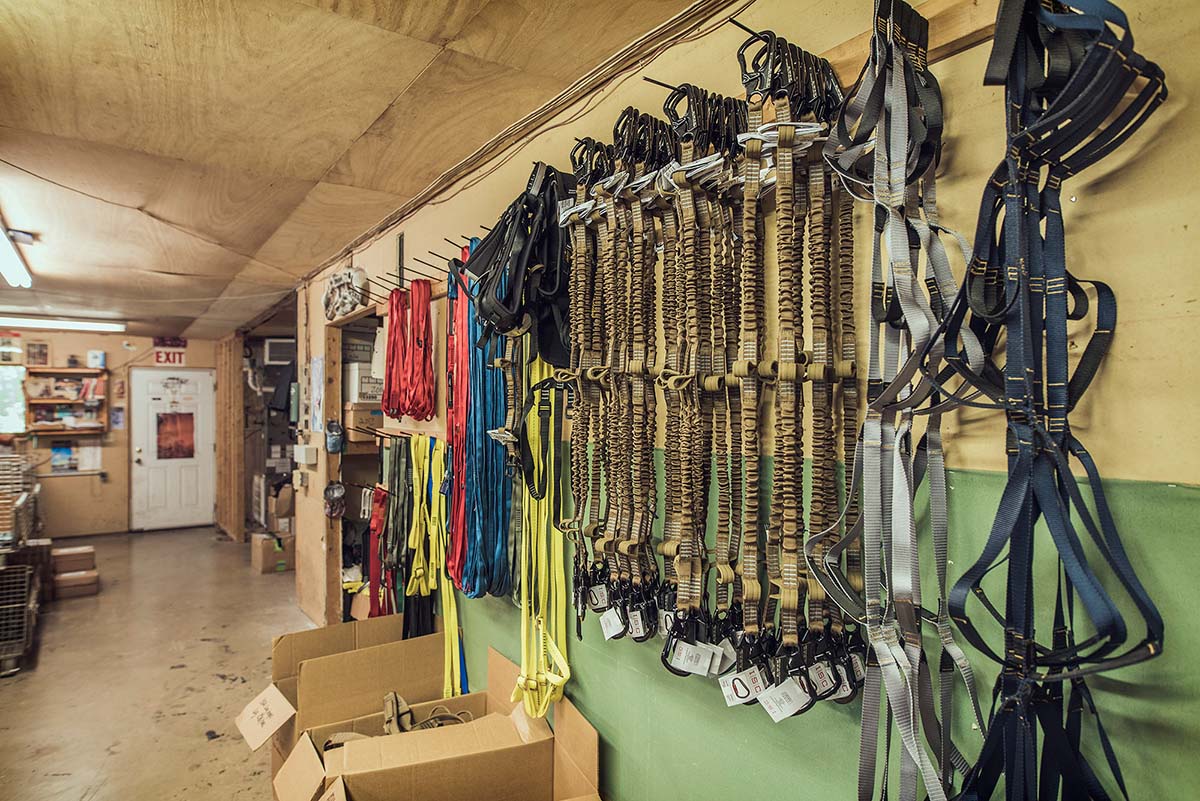 Although Misty Mountain's products sit on the shelves of gear shops across the nation, the company has diligently maintained its ties with Appalachia. Inside the factory, local workers—a woman born and raised just down the road, her adult daughter, a middle-aged man sporting a fishing cap and an Alabama football t-shirt—sit at sewing machines alongside Chaco-clad App State graduates and some of the region's strongest climbers. On the wall, smatterings of school photos, kindergarten artwork, and the odd reference to hunting or fishing intermingle with climbing paraphernalia. A map displays El Capitan's myriad of routes. A "SLOW Grandparents at Play" sign hangs precariously; a stuffed bobcat sits on a shellacked wooden branch and oversees the goings on. In a way that rarely occurs in the south—or anywhere, for that matter—oil and water harmoniously mix. Climbers and locals. Young and old. Educated and not. With kindness in his voice, Goose uses the term "anachronism" to describe the headquarters' vibes. Although I'm not sure if he's referring to the old silver Singer sewing machines, the appearances of his employees, or the emphasis on community over capitalism, one thing is clear: Misty Mountain is an anachronism that works. 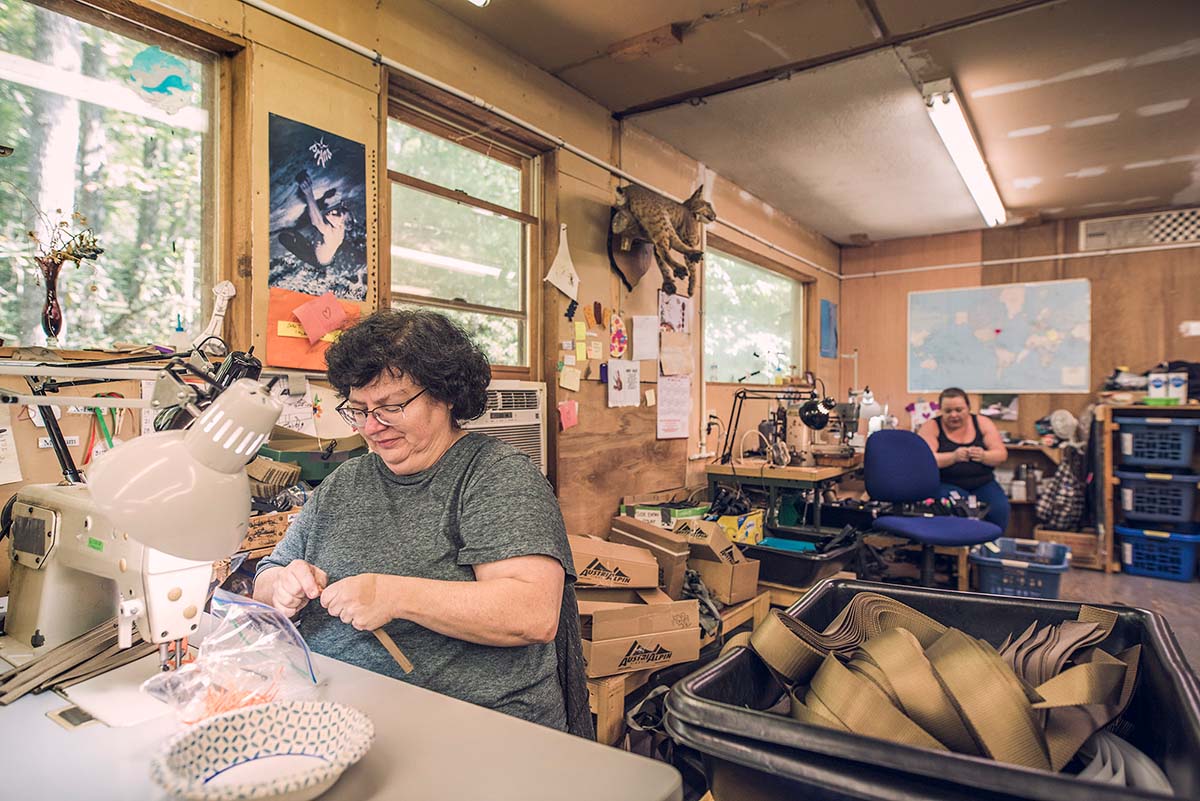 "I'm never going to be a Black Diamond," Goose tells me. Hurricane Florence has come and gone, and it's the kind of late September afternoon that makes you wonder if summer is around to stay. It had taken some effort to steer him toward this sort of comparison, as if it were the last thing on his mind. "I don't have the business wherewithal, I don't have the financial backing. And I don't have the desire." 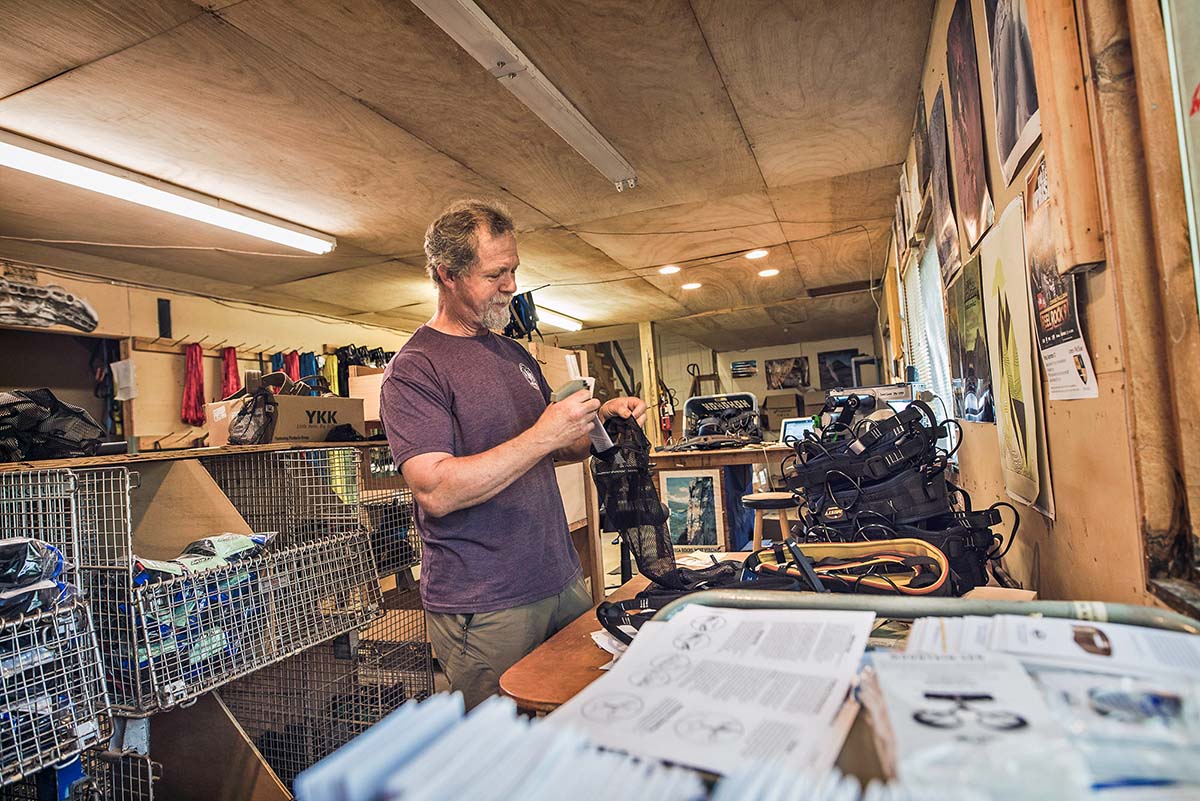 "What I want is to be a corporation that gives back. [A corporation] that is good, that treats people the way you'd want to be treated. I want to invest in my employees and make the finest climbing equipment in the world. But ultimately what it's all about is to be able to live in the mountains of North Carolina and be with my family." 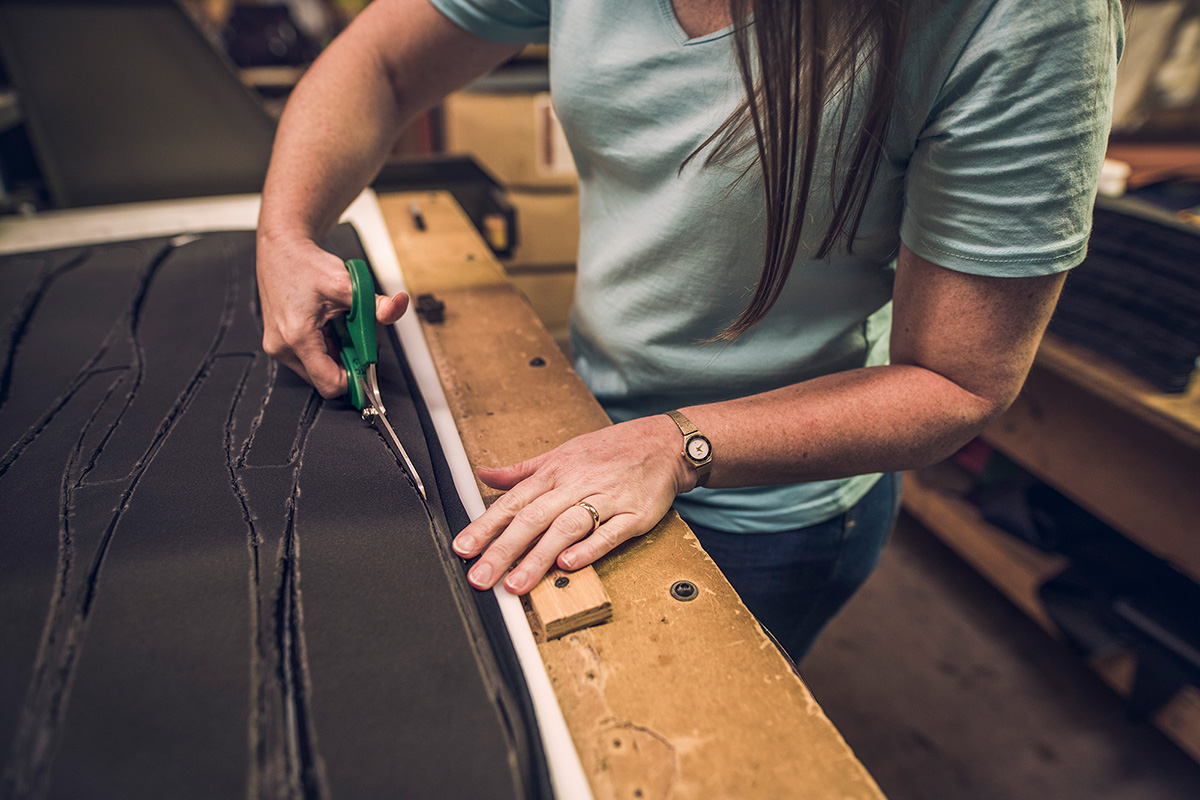 And Goose is doing it. Misty Mountain is now 17 employees strong and consistently promotes from within. Goose's wife works part-time on special projects, his son comes home during the summer to help out—it's really a family affair. They've profited from the boom that climbing has experienced, with harness sales increasing by six percent over the last several years. And in terms of products, their lineup ranges from lightweight harnesses for sport climbing and alpinism to big wall harnesses, full body harnesses, dog harnesses, military harnesses, challenge course harnesses, backpacks, crash pads, and more. And every facet of their operation, from sourcing to design to production, happens in the United States. 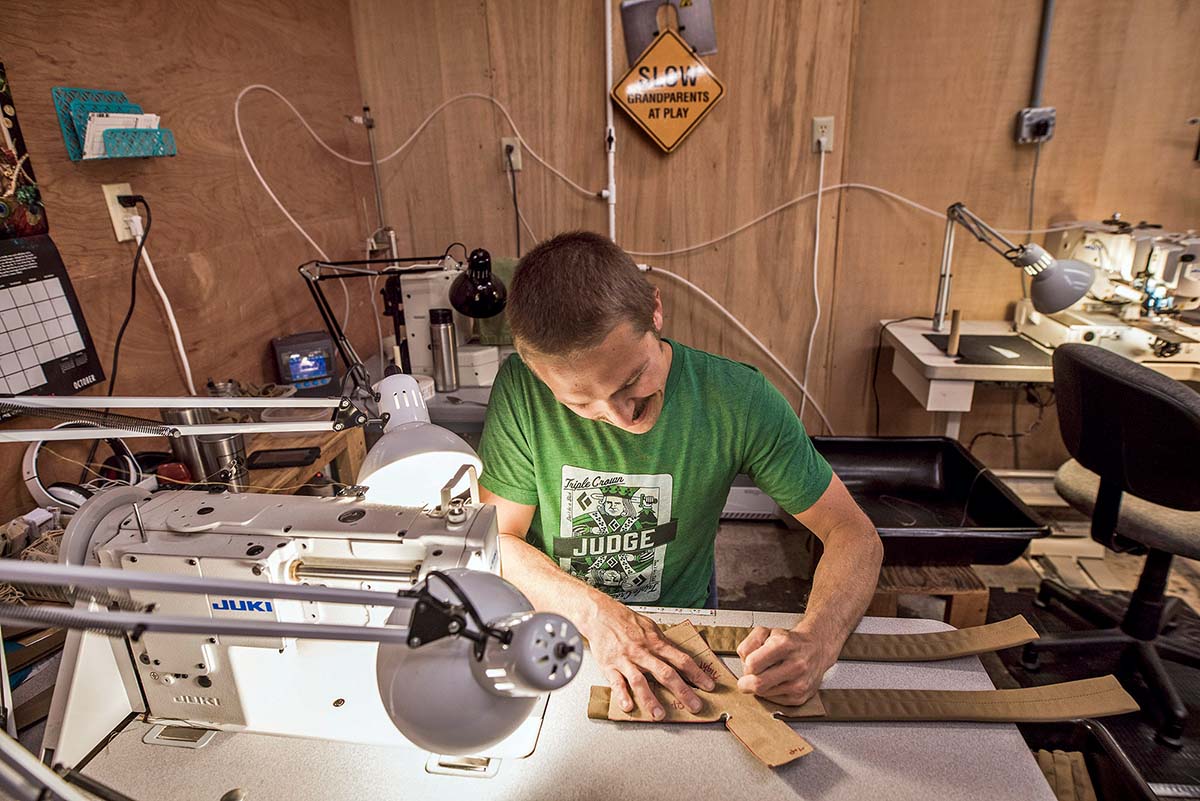 Black Diamond Equipment, owned by a large company called Clarus Corp, netted over $148 million in sales in 2016. Climbing was recently named an official sport for the 2020 Olympics. Forty three new climbing gyms opened across the U.S. last year alone. Alex Honnold is nearing one million Instagram followers, and Tommy Caldwell's free ascent of the Dawn Wall made front page news in the New York Times. The production of most of our outdoor gear has been moved to far-flung countries. And yet, in the folds of the forested hills just east of the Watuga River and in the shadow of the Blue Ridge Mountains, the good people of Misty Mountain Threadworks sit at their old Singer sewing machines, stitching together the next batch of custom-made harnesses. They may not be flashy or cutting-edge, but neither is North Carolina. And that's the way they'd like it to stay. 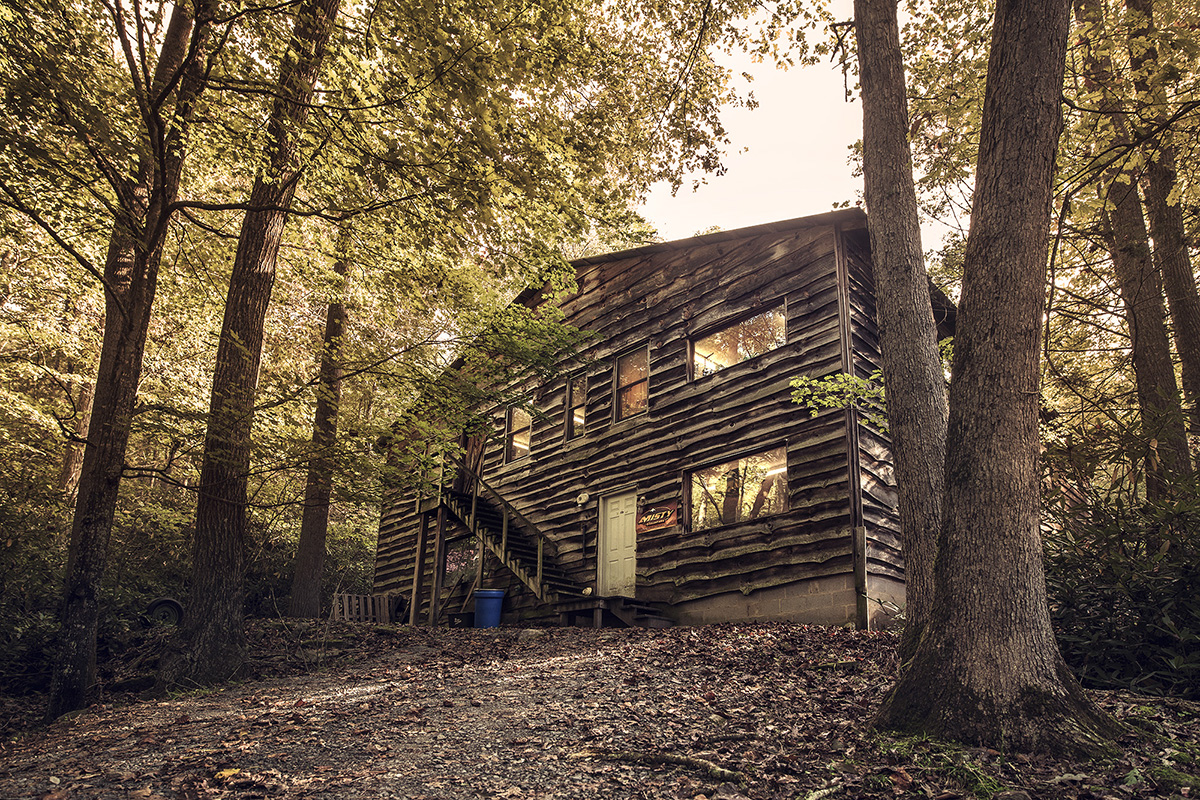 Our "Homegrown" series seeks to highlight some of the smaller companies in the outdoor industry and the passion, creativity, and uniqueness that they embody. Thanks to Bryan Miller of Fixed Line Media for making the trip out and capturing the essence of Misty Mountain. 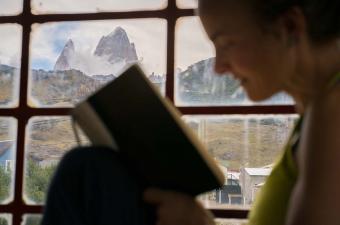 We wake at 6am to the faint jingle of Lorna’s watch muffled by her sleeping bag. My body creaks as I pull my sore arms from my sides, grab my headlamp, and light the JetBoil that I had carefully placed outside our tent the night before... 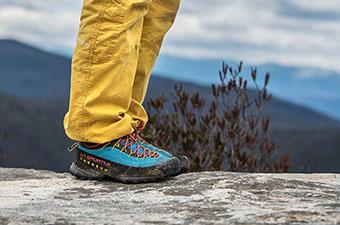 As an alpine rock climber and climbing guide, my feet frequent a great deal of trail, rocks, and snow—especially during the summer months. I took on the La Sportiva TX3 as my faithful companion throughout a season of testing, from high-mileage link-up... 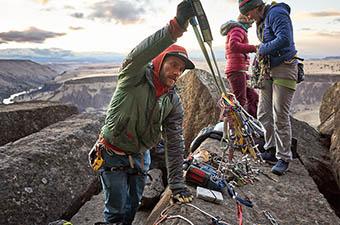 Whether you spend your days climbing indoors or scaling multi-hundred-foot monoliths, it’s always helpful to know what you need. Our detailed climbing checklist below covers everything from equipment for different... 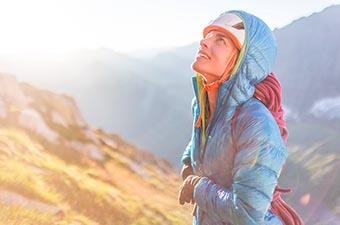 When people get into rock climbing, they often ask me what kind of shoes, or harness, or rope they should buy. I always tell them the same thing: the first thing you should buy is a helmet...