We put Thule’s versatile hydration pack through a season of mountain biking in dirt, mud, and snow 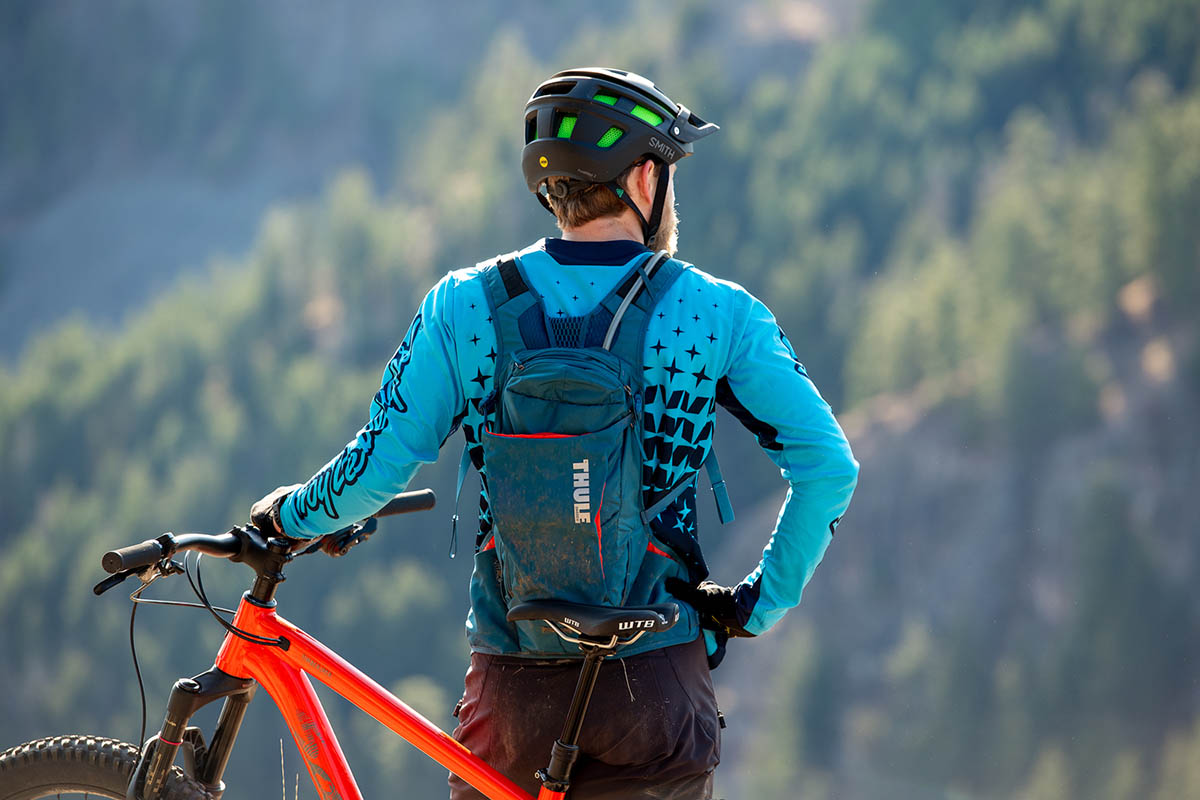 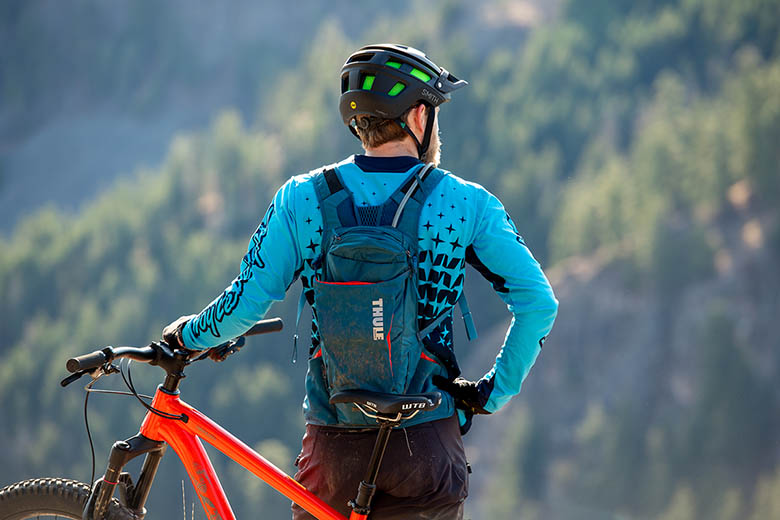 Better known for their bike racks and carriers, Thule entered the hydration pack market with the mountain biking-specific Vital lineup in spring 2018. I’ve opted for hip packs the past few years on technical rides to allow my back to breathe, so I was a little wary of the potential downsides of returning to a full-sized pack. That said, after a season of wearing the 8-liter Vital, I’m happy to report that it passed all my major tests: it offers a nice balance of internal and external storage, has excellent breathability, and remains comfortable and secure during rough descents. Below I break down the Thule Vital’s comfort, ventilation, hydration system, pockets and organization, fit and sizing, and more.

Simply put, Thule’s Vital 8L is one of the most comfortable hydration packs I’ve ever worn. That’s a bold claim considering I’ve used many of the most popular options over the last 15 years, but it has remained true throughout all of the Vital’s days on the trail. The pack felt a little flimsy in-hand at first, but I quickly found that it shaped nicely to my body and was able to support reasonably heavy loads. In addition, the ergonomic shoulder straps did a great job of hugging my upper body without causing any discomfort or chaffing—an issue I had with CamelBak’s Skyline during break-in. And most impressively, the Vital’s ultra-wide waist straps effectively secured the pack in place during rough and rocky descents. While the Vital is more pared-down than some of the competition, its soft and malleable materials soon had me grabbing it more often than any other pack in my collection. 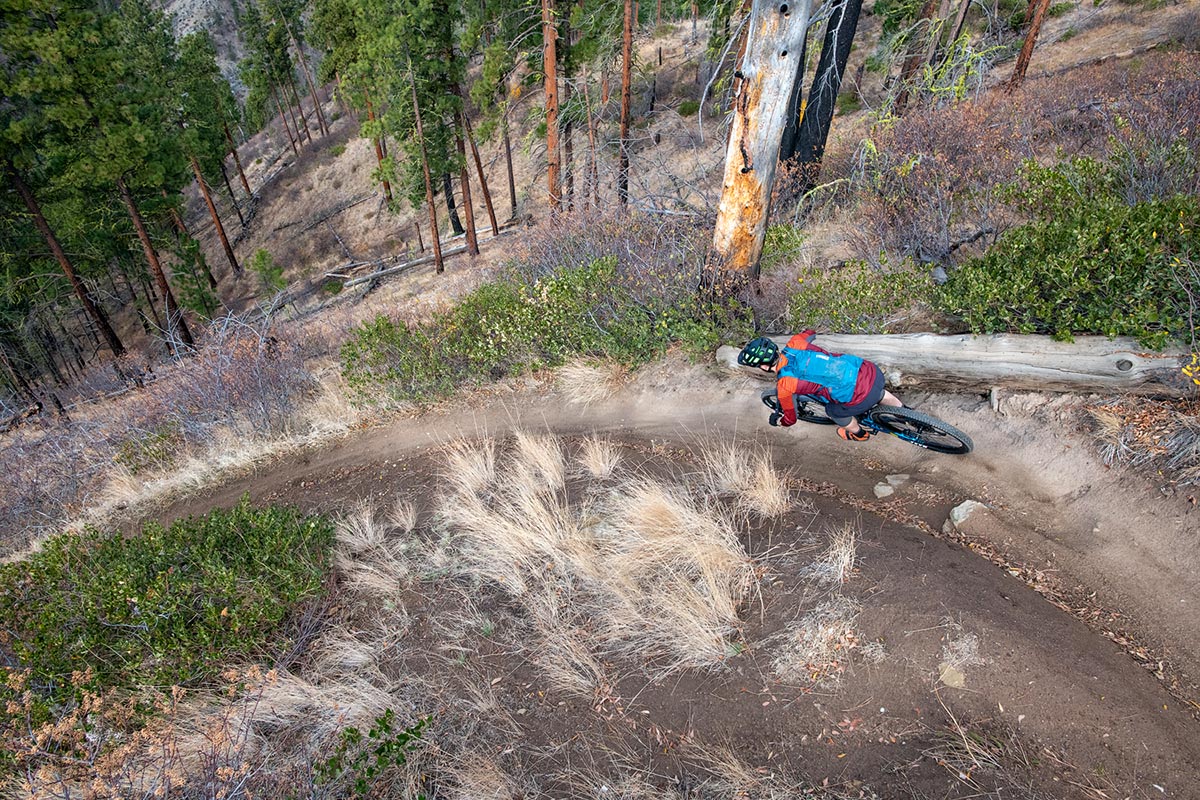 Before commenting on the Vital’s ventilation, it’s important to note that I ditched backpack-style hydration packs years ago. After experiencing a sweaty back on too many rides with my CamelBak M.U.L.E., I landed on the hip pack (we serious bum-baggers avoid the term “fanny pack”). Apart from the obvious style points, hip packs allow your back to breathe freely in the heart-pumping steeps. So, when I learned I’d be testing standard hydration packs, I was less than excited. All that said, I’m happy to report that the Vital is one of the most breathable backpacks I’ve worn to date. I think this comes down to Thule’s effective use of different materials: the closed-cell foam used throughout the pack has slits to promote airflow, and the backing, shoulder straps, and hip straps incorporate a generous amount of breathable mesh. Even compared to CamelBak’s low-riding Skyline LR 10 that leaves more of your back exposed, I found the Vital was a much better breather. 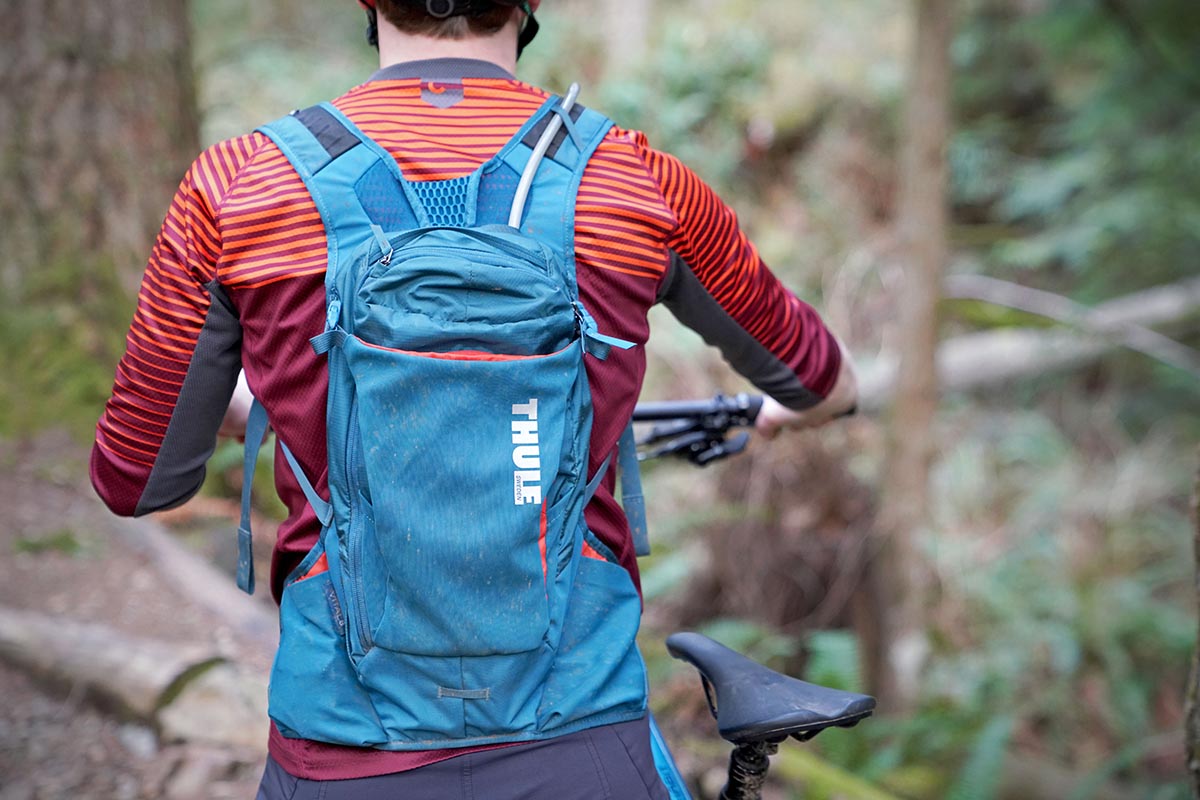 The medium-capacity Vital 8L that I tested includes a proven 2.5-liter Hydrapak reservoir, along with a number of sneaky-useful features. The reservoir has an internal divider that limits water movement and sloshing during technical descents—it’s essentially two tubes that connect at the bottom of the bladder. And while the reservoir’s Slide-Seal top isn’t quite as easy to fill when compared to CamelBak’s twist-on closure system, it does allow unrestricted access for cleaning. 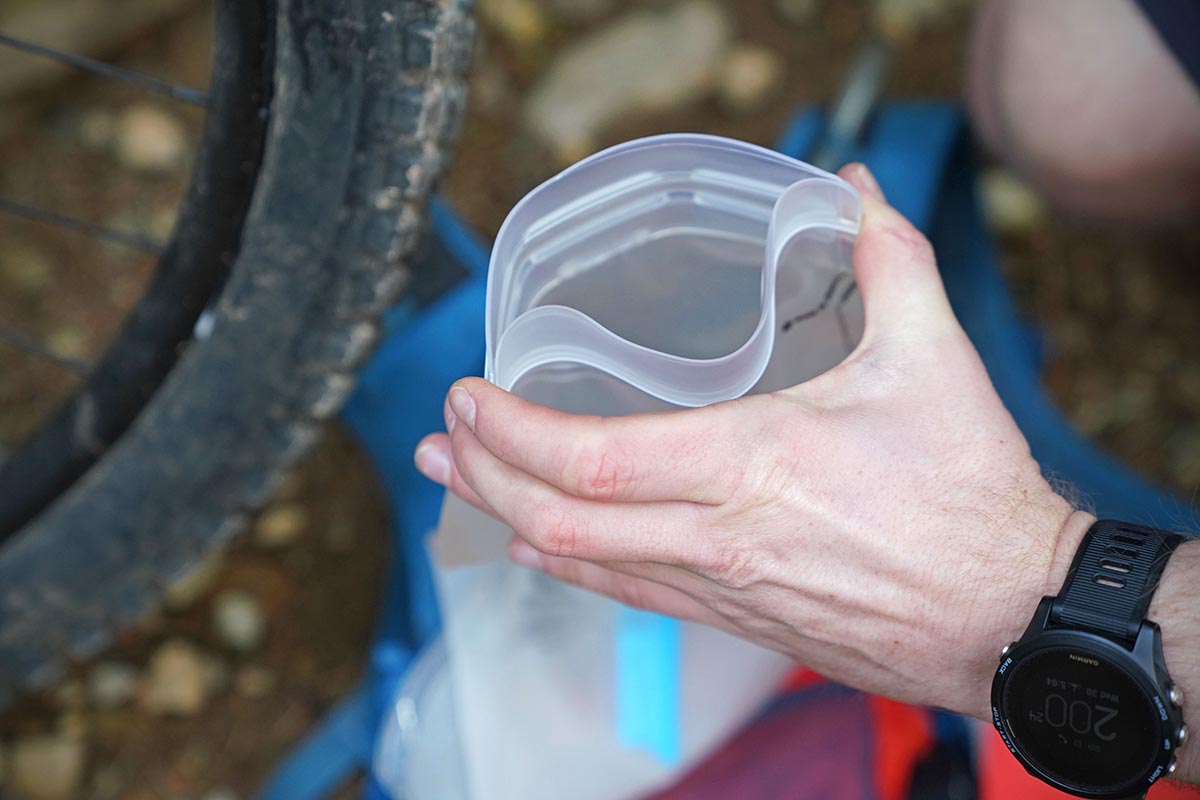 However, the best part of the whole system is undoubtedly the hose. Most hydration pack hoses from brands like CamelBak and Osprey are secured to the shoulder strap with clips or small magnets, requiring you to carefully and precisely remove and re-attach the hose whenever you want a sip of water. Some packs even forego retention systems entirely, leaving the hose flapping around as you ride over bumps and obstacles. However, Thule’s ReTrakt system is the simplest retention method we’ve come across yet: a magnetic strip runs the length of the hose and connects to another strip of the same length (around 5 inches) along the shoulder strap. You simply pull the nozzle as usual to drink and then release, and the hose reconnects to the strap automatically. In practice, this couldn’t have been easier. 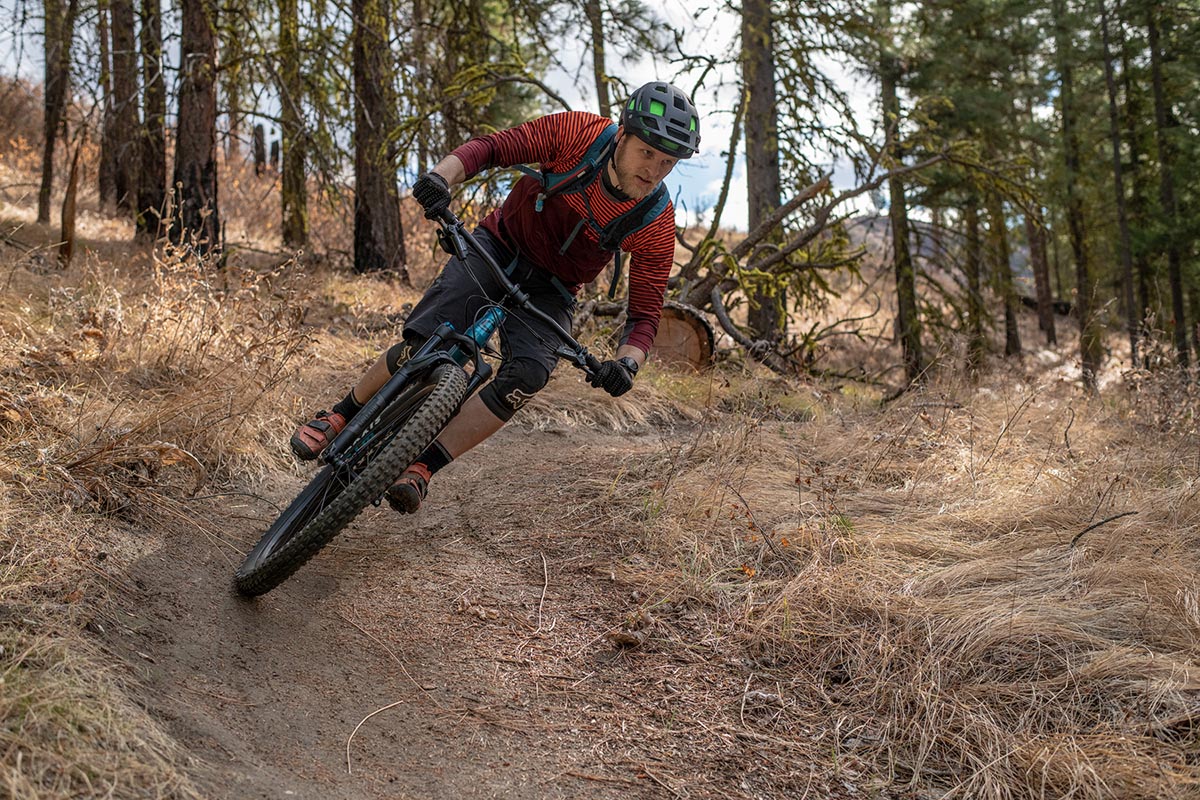 With a designated spot for almost everything you need on a ride, Thule clearly put a lot of thought into the pack’s organization. The main compartment has interior loops for a tire and shock pump and the mesh dump pockets are great for stashing a multi-tool, spare derailleur hanger, and chain link. You’ll also find a key clip and interior zippered pocket that’s a good size for valuables. 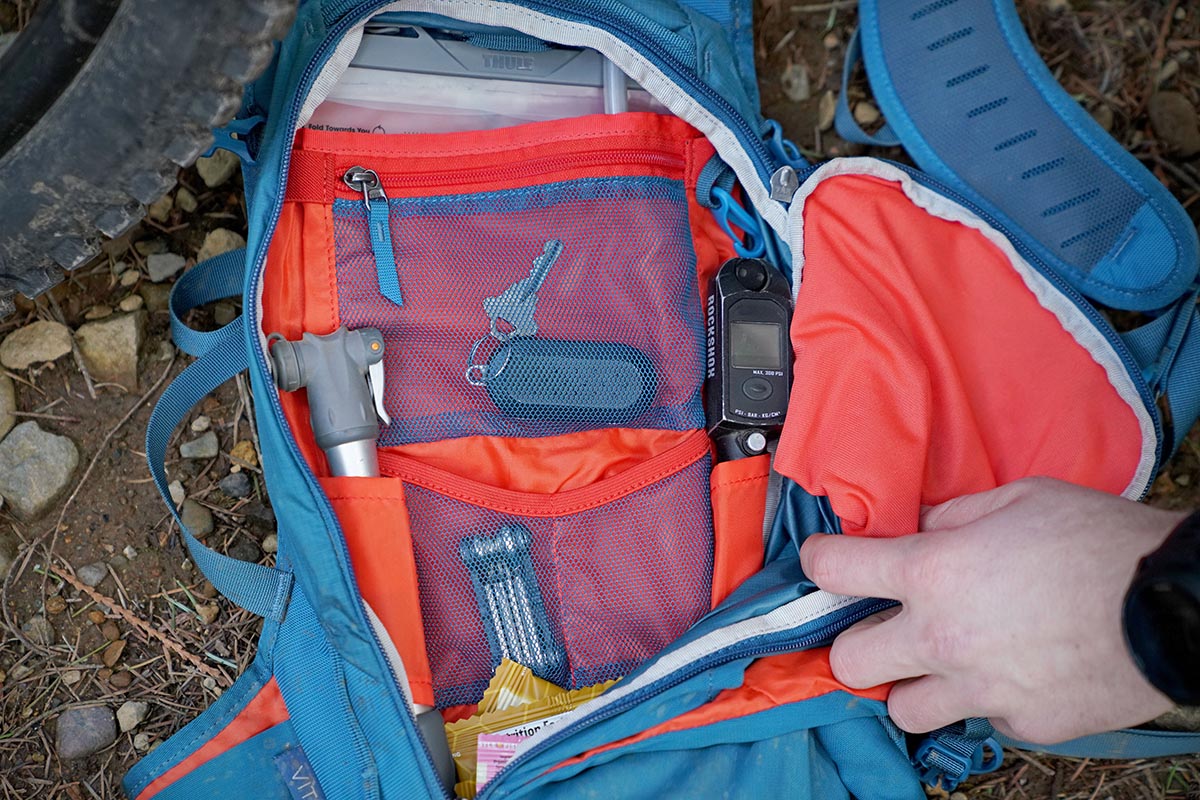 In terms of external storage, the Vital features a phone-sized fleece-lined pocket at the top and jersey-style pockets on each side of the hip belt. I found the latter were perfect for accessing food and snacks on the fly. For storing extra clothes, the Vital has an expandable panel on the front that easily swallows a jacket. Notably, however, the Thule does not include attachment points for storing a helmet, which is a big downside if you like to remove your lid on long fire road climbs. As long as the lack of helmet storage isn’t a deal breaker, the pack has ample room for all the essentials and even a few non-necessary items. 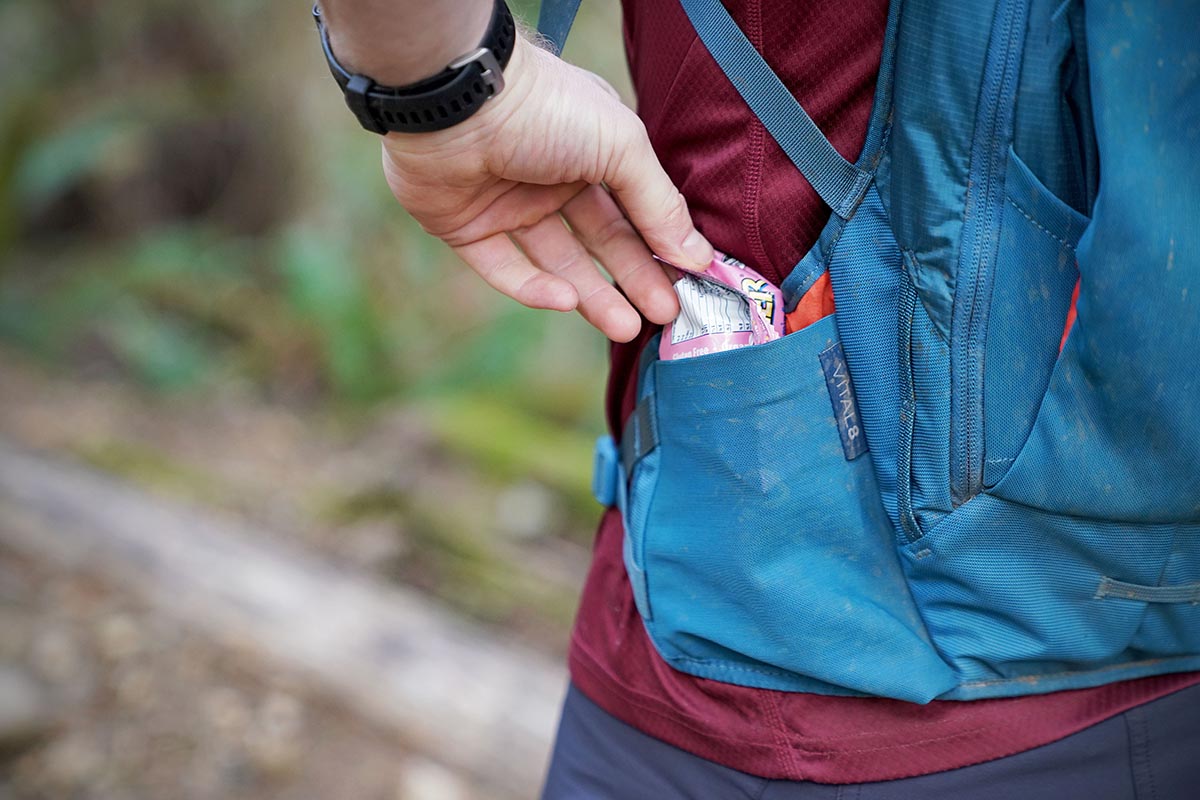 I spent the better part of the fall and winter using and abusing the Thule Vital and it has emerged unscathed. It’s been coated with a thick layer of dirt, mud, and even snow and has shrugged it all off with ease. I’ve even ended up upside-down on top of the pack a few times and am happy to report it’s free of holes and the stitching shows no wear or loose threads. Even the mesh sections (most high-wear areas are made of more robust nylon) have held up remarkably well. I often find it takes an entire season to test a product’s durability thoroughly, but I have no concerns about how the Thule will fare in the long run. 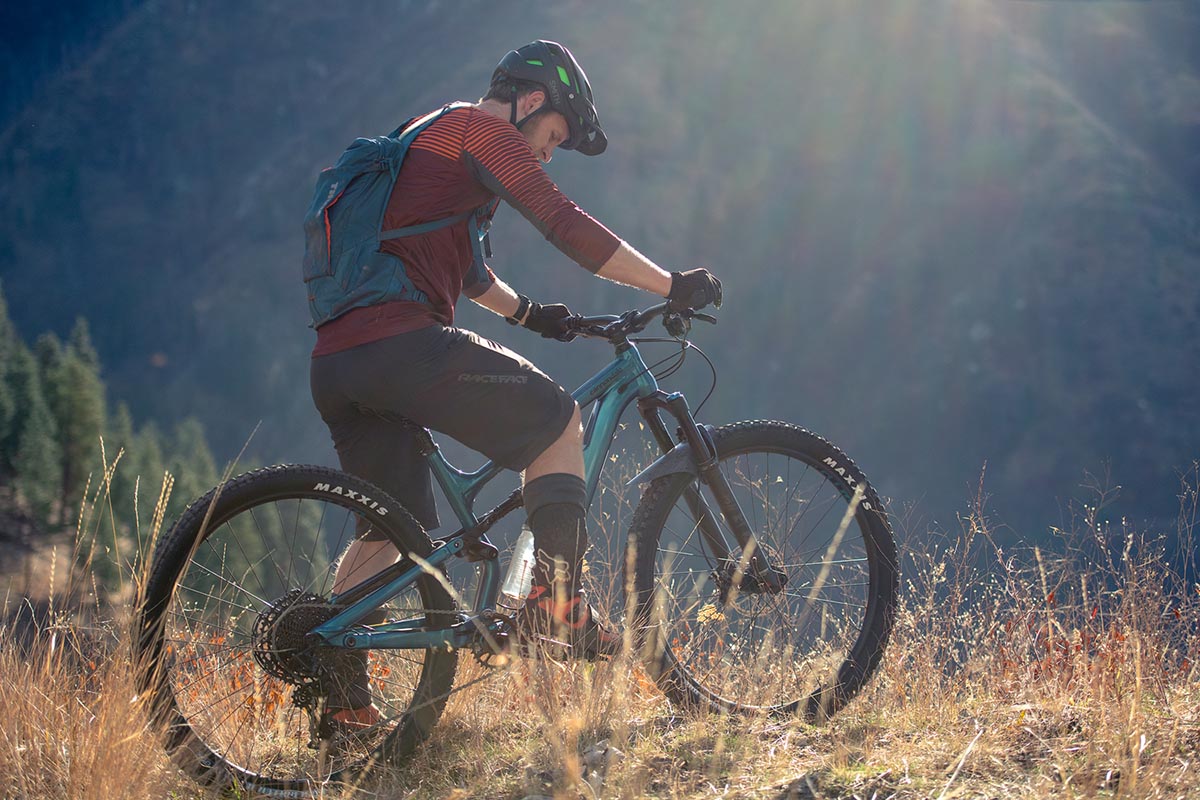 The 8-liter Vital tips the scale at 1 pound 3 ounces, which is reasonably lightweight compared to similar-capacity models from other brands. For comparison, it undercuts CamelBak’s popular M.U.L.E. (1 pound 5 ounces) and Skyline LR 10 (1 pound 6 ounces) just slightly. Osprey's new Siskin 8 (1 pound 3 ounces) matches the Thule, while their redesigned Raptor 10 (1 pound 9 ounces) comes in a bit heavier. That said, the Vital is fairly bereft of features compared to many other models—it lacks a helmet retention system and toolkit pouch, for example. 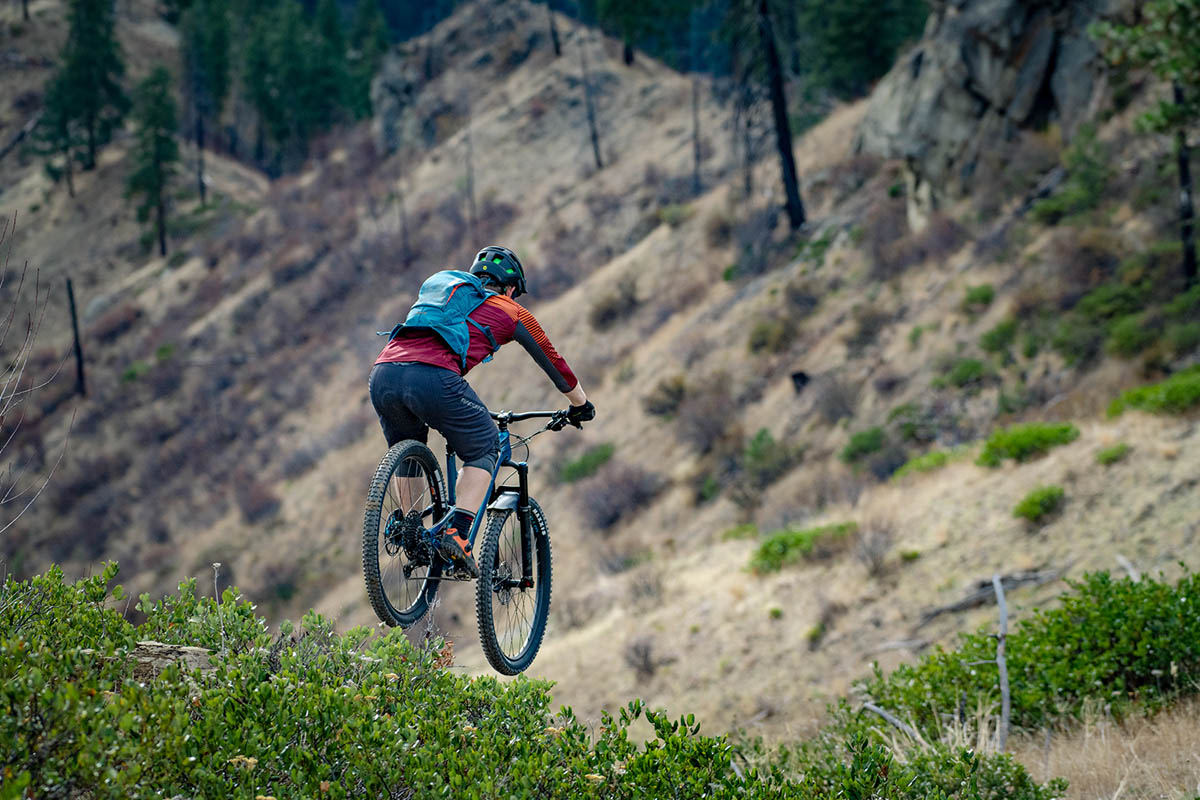 Thule took a one-size-fits-all approach with the Vital. This isn’t uncommon in the hydration pack world—CamelBak does the same with most of their packs, although they offer women’s-specific versions for some models that are designed for smaller frames. I’m 5’9” and a medium in almost all cases, so the Vital fit me predictably well and allowed a good amount of adjustment for tightening or loosening. On one of my rides, I convinced two friends—one who is 5’4” and one who is 6’1”—to try the Vital and neither had complaints about the straps being too roomy or restrictive. 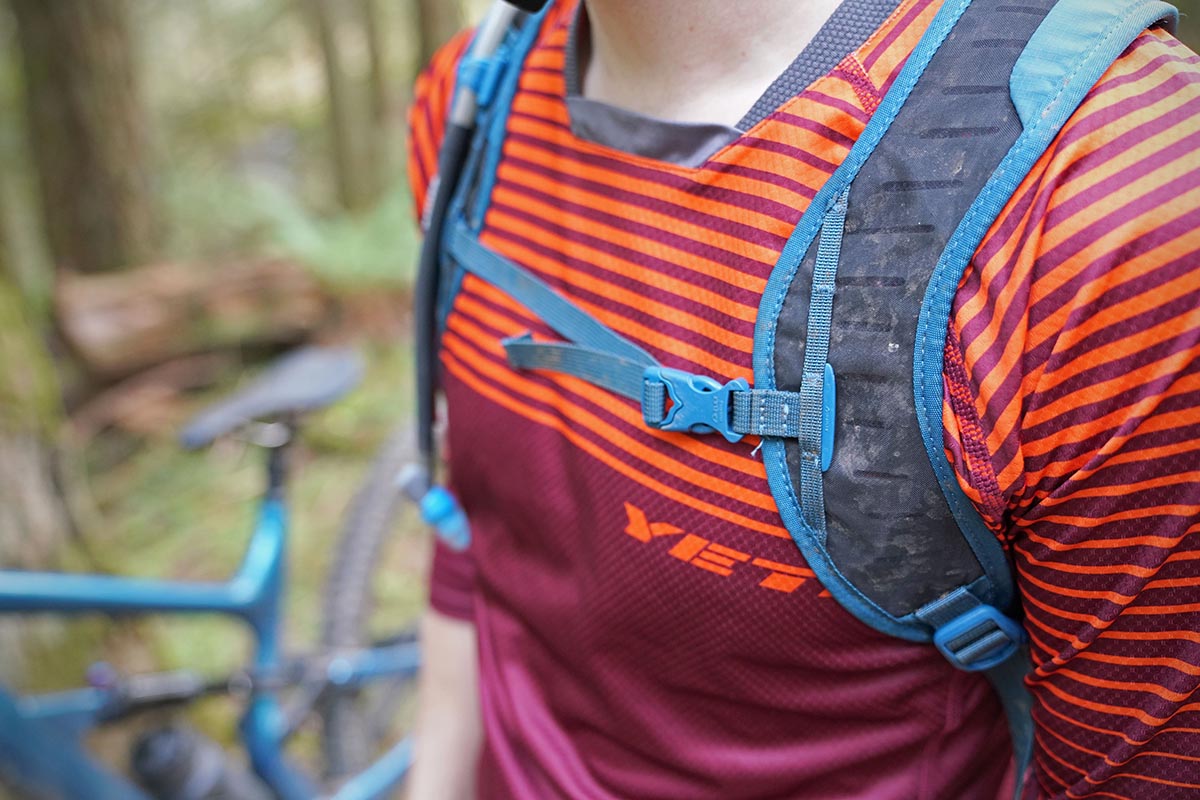 Other Versions of the Thule Vital

We tested the 8-liter version of the Vital ($140), which is the largest-capacity pack in the lineup. Thule also makes the Vital in 6-liter ($120) and 3-liter ($90) versions, both of which also come in black or teal, but we prefer the added storage and versatility of the biggest model. That said, the Vital 6L is almost identical in terms of features and build: both have the same internal layout, waist and shoulder straps, and 2.5-liter Hydrapak water bladder. However, the smaller Vital does away with the outer expandable panel. The 3-liter Vital is even more trimmed down: there’s no outer storage or fleece-lined phone pocket, the shoulder straps and back panel don’t have foam, and the pack only comes with a 1.75-liter water reservoir. 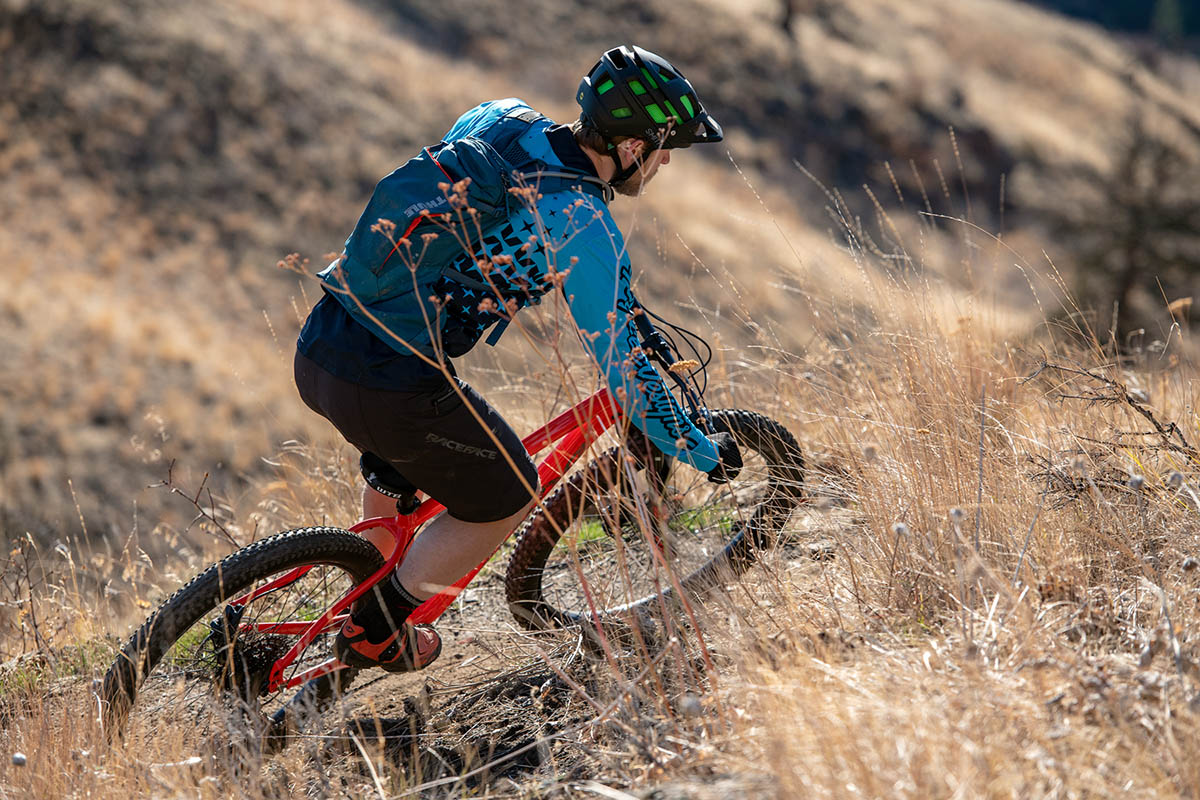 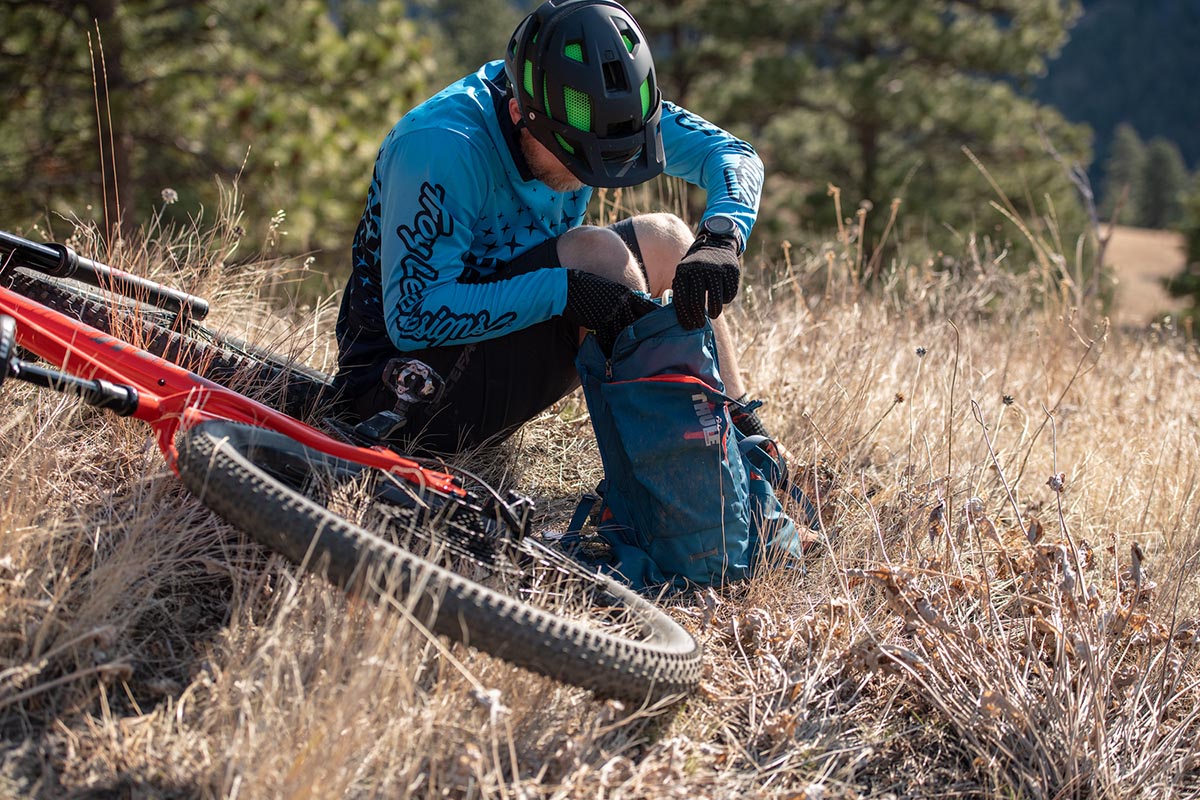 I’ve logged significant mileage with the Thule Vital 8L, so it makes sense to compare it with another one of my go-to packs: the CamelBak Skyline LR 10. Like the Vital, the Skyline has a low-riding design and offers a comparable 7 liters of storage (the Vital has 8). However, the Skyline is more fully featured with a removable, foldable bike tool organizer and carrying system for a helmet and pads. That said, I found the Vital’s more mesh-heavy design keeps my back cooler during hot summer rides, is less likely to move around during steep and technical descents, and sports higher-quality materials and features throughout (including an easier-to-use, clipless hose). The Skyline will save you $10 and get you another .5 liters of water storage, but I prefer the pared-down Thule for its better overall performance on the trail. 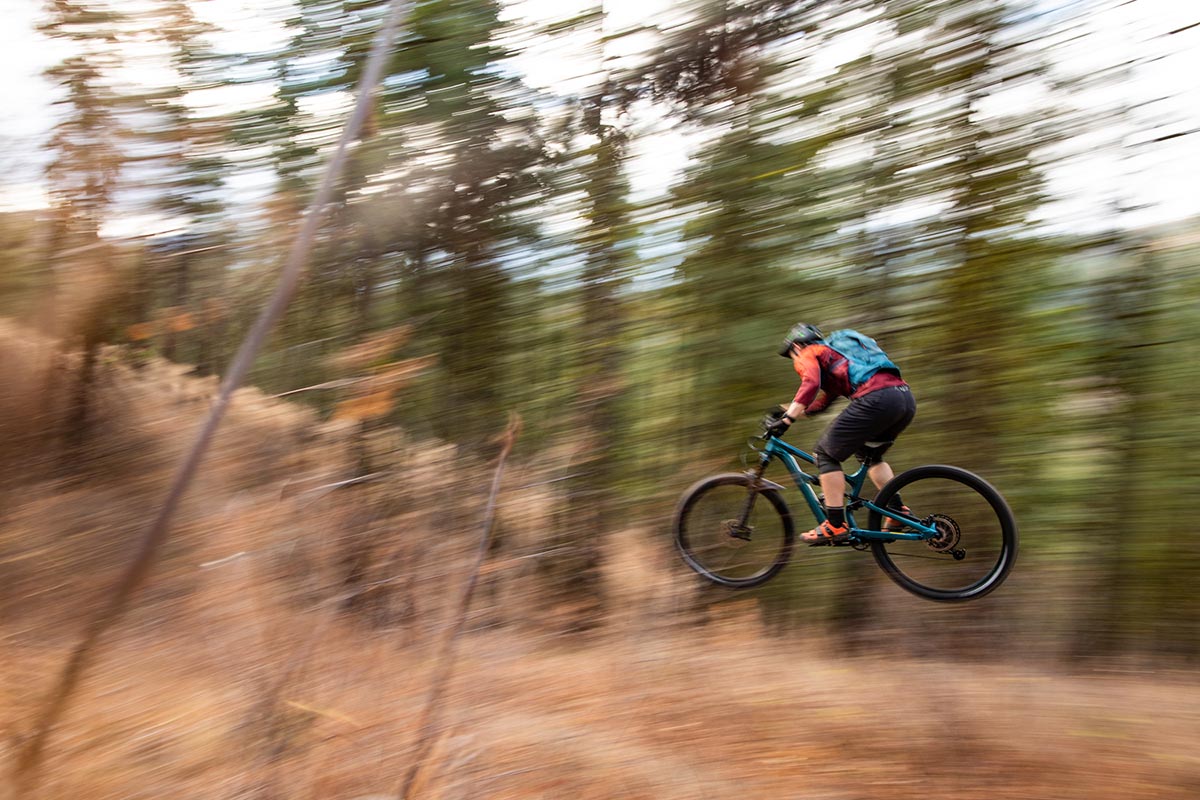 First launched in 1996, the CamelBak M.U.L.E. has been a popular pack among riders for over two decades, with notable improvements incorporated along the way. The current M.U.L.E. features similar gear- and water-carrying capacities (9 liters and 3 liters respectively) and also has a nice back-hugging design. Further, it offers helmet carry hooks and reflective accents for late-night or early-morning rides. But in terms of performance, I found the Vital was a much better breather and offered more security on rocky descents—two critical considerations that give the Thule the overall edge.

A final option to consider is Osprey’s new Siskin 8. With 8 liters of storage capacity, a slim profile, and reasonable $100 price tag, the Siskin 8 is an undoubtedly impressive pack. However, the Siskin’s narrow waist straps pale in comparison to the Vital’s beefier belt that effectively keeps the pack in place. I also prefer the Thule’s lower center of gravity that allows the pack to sit further down on my back and stay out of the way as I ride. The Siskin 8 is a great value, but we give the nod to the Thule as the more well-rounded design. 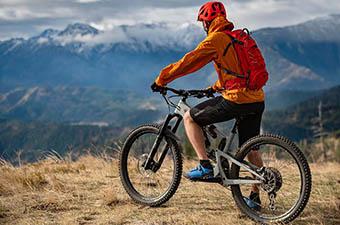 Mountain bikes have come a long way in recent years, with trends like 29-inch wheels—and more recently, 27.5-inch wheels—blazing the trail for bikes that are better and more... 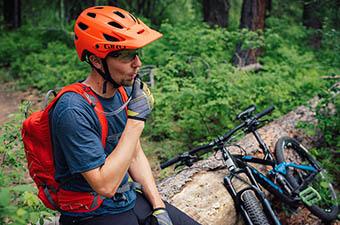 If your mountain biking gear budget has been stretched thin and you’re tempted to skimp on the helmet, don’t. Skip that extra bit of carbon instead. It’s true, mountain bike helmet prices are creeping up... 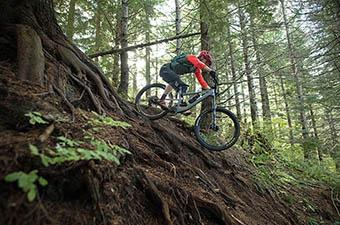 Santa Cruz is known for making some of the best bikes in the industry, and their attention to detail and quality of craftsmanship are second to none. The Bronson line made its debut all the way back in... 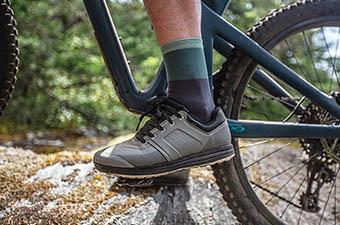 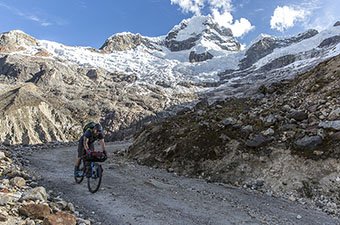 Peru has always peaked our interest, with towering whitewashed mountains, the Amazon rainforest, and more ancient history than we Canadians know what to do with. However, after seeing a few pictures... 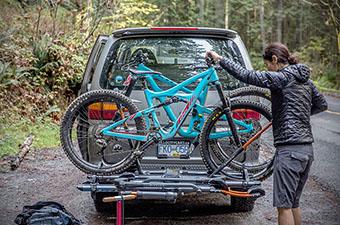 If you’re searching for the best way to transport bikes, hitch-mounted bike racks are the way to go. Securely attaching to the receiver hitch of your vehicle, they offer unmatched versatility and ease of use. There... 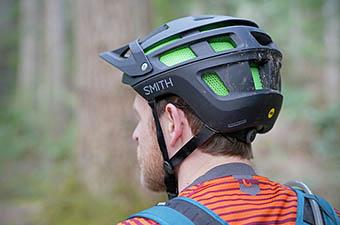 Smith’s foray into the world of mountain bike helmets began in 2014 with the release of the lightweight Forefront. Four years later, they introduced the “2” with notable updates, including a lower-profile design, improved ventilation, and wider, more... 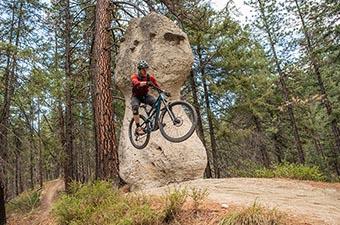 Connecticut-based Cannondale has always done things a little differently, but their revamped and surprisingly mainstream 2019 Habit seeks to make them a top contender once again. With its... 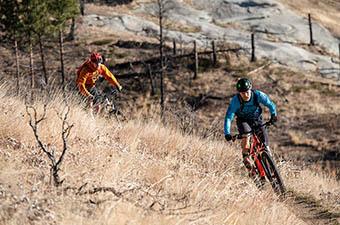 Mountain biking can be a very expensive sport: there are hundreds of excellent bikes available for $4,000 to $6,000, and those aren’t even at the highest end of the price spectrum. Fortunately for those of us not...