Light, airy, and responsive, we hit the road with Saucony’s leading stability shoe 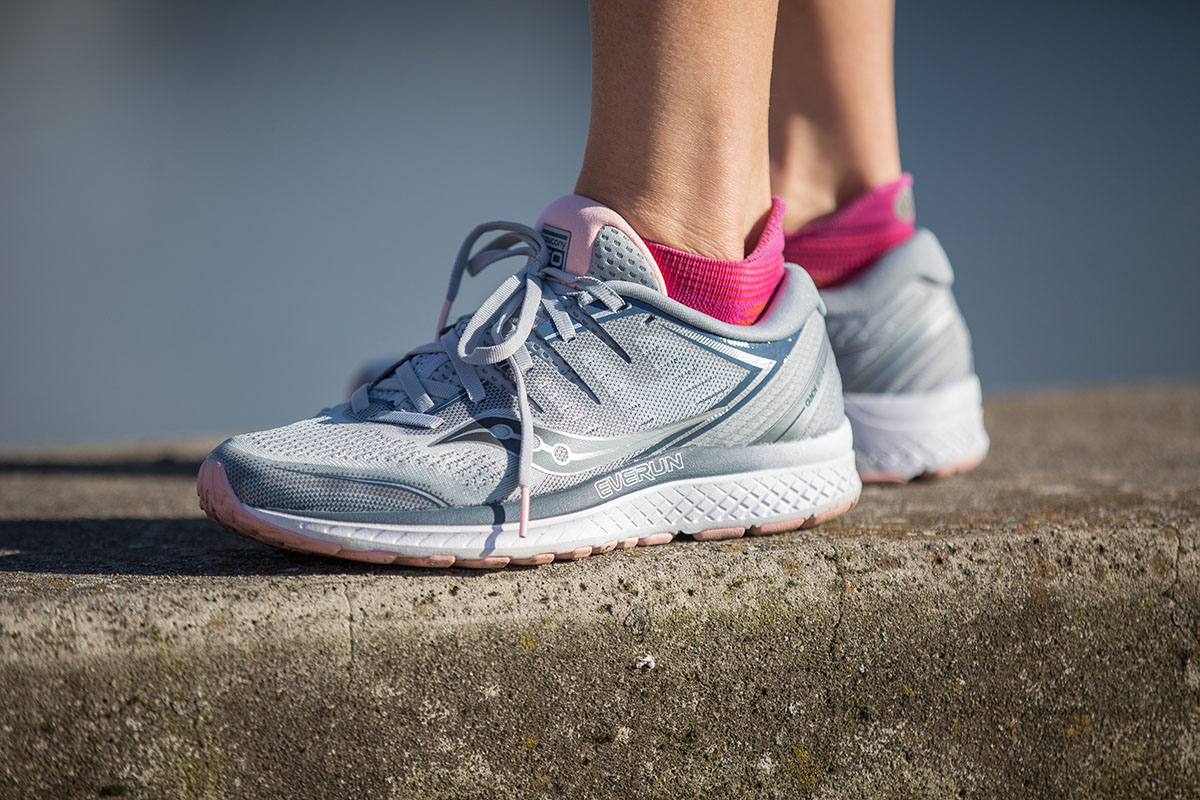 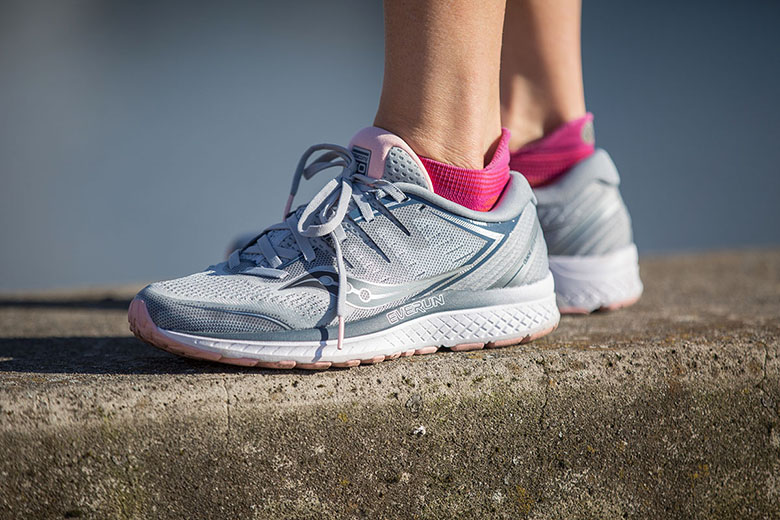 Saucony’s Guide ISO 2 marks the 12th generation of the popular stability shoe. Compared to the outgoing ISO model, the “2” incorporates more breathable mesh, has slight changes in the midsole, and comes in a bit lighter. Now my third pair of Guides, I put the newest version through its paces on pavement and crushed gravel, and appreciated its modest cushioning, sturdy but subtle support, and great responsiveness. However, the shoe’s notably shallow toe box caused some pressure-related issues and durability concerns. Below we break down the Guide ISO 2’s cushioning and comfort, responsiveness, stability and support, weight, durability, fit and sizing, and more. To see how it stacks up, see our article on the best running shoes.

The Saucony Guide ISO 2 marks the third iteration of Guides I’ve owned (I previously had the 9 and 10), which is a testament to the shoe’s comfort and overall performance. Throughout its testing so far, I’ve been especially impressed with the shoe’s comfort and capability on level ground and uphill pushes. However, on its first long run of around 13 miles on undulating terrain, I noticed a familiar issue: just as I experienced with past-generation Guides, my big toe pushes into the ceiling of the toe box on the new model, creating pressure at the top when running downhill. In the past, this eventually led to holes in the mesh. As such, the ISO 2 has taken on the role of being my lunchtime runner, where I stick to a flat, crushed gravel trail network in North Vancouver. 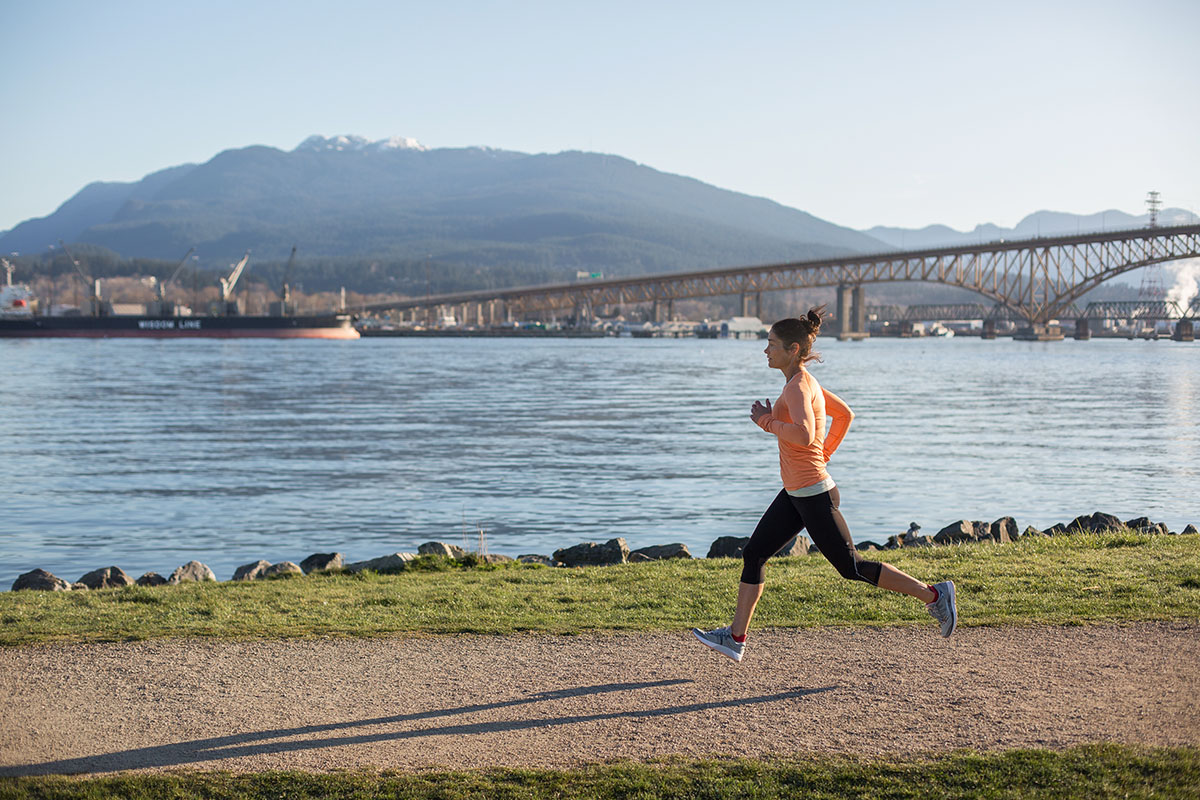 Aside from the shallow toe box, I’ve been very happy with the Guide ISO 2’s overall comfort and cushioning. The “ISO” in the shoe’s name is short for “ISOFIT,” Saucony’s proprietary two-part design: a soft inner sock sits beneath the shoe’s upper lacing system. This set-up allows easy customization and helps the shoe move closely with your foot. Along with the thick and plush tongue, the design is so supple that I’m able to wear short, hidden socks without any rubbing or discomfort. And as far as cushioning is concerned, the Guide ISO 2’s midsole/topsole design provides a modest but sufficient amount of padding (stack height is 27mm at the heel with an 8mm drop). If it weren’t for the pressure point at the toe box, I would give the Guide high marks across the board. 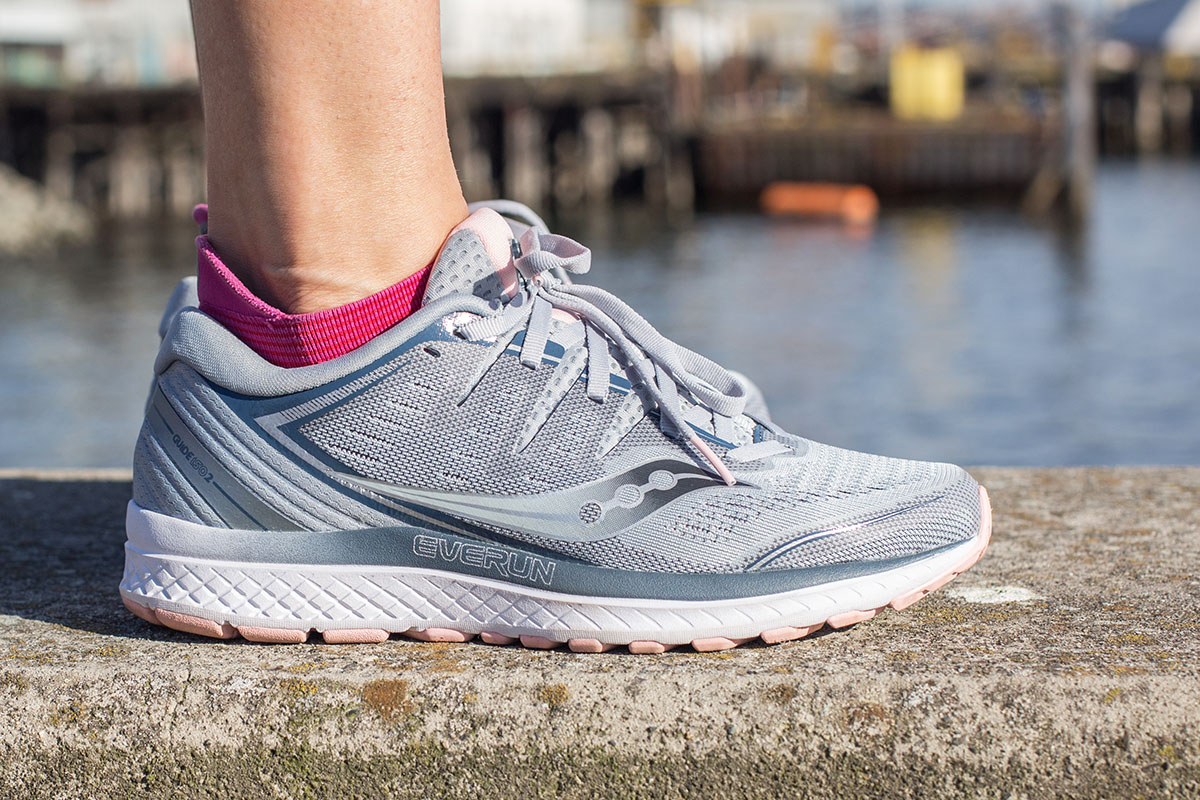 Cushioning and responsiveness don’t often go hand in hand, but Saucony has struck a nice balance with the Guide ISO 2. The shoe has great energy transfer from the proprietary midsole/topsole, and I can feel it propelling me forward. This is a notable departure from my experience with more cushioned, neutral shoes, including the Hoka One One Clifton 6 and Altra Torin 4. And on the uphill, the lightweight and sprightly Guide is even more of a standout: the tread effectively grips both asphalt and gravel, driving me upward with surprising ease for a road-focused design. All told, I’ve found the shoe excels most on mid-length runs on pavement (about 5-10 miles) and can also be a capable option for fast-paced half marathons. 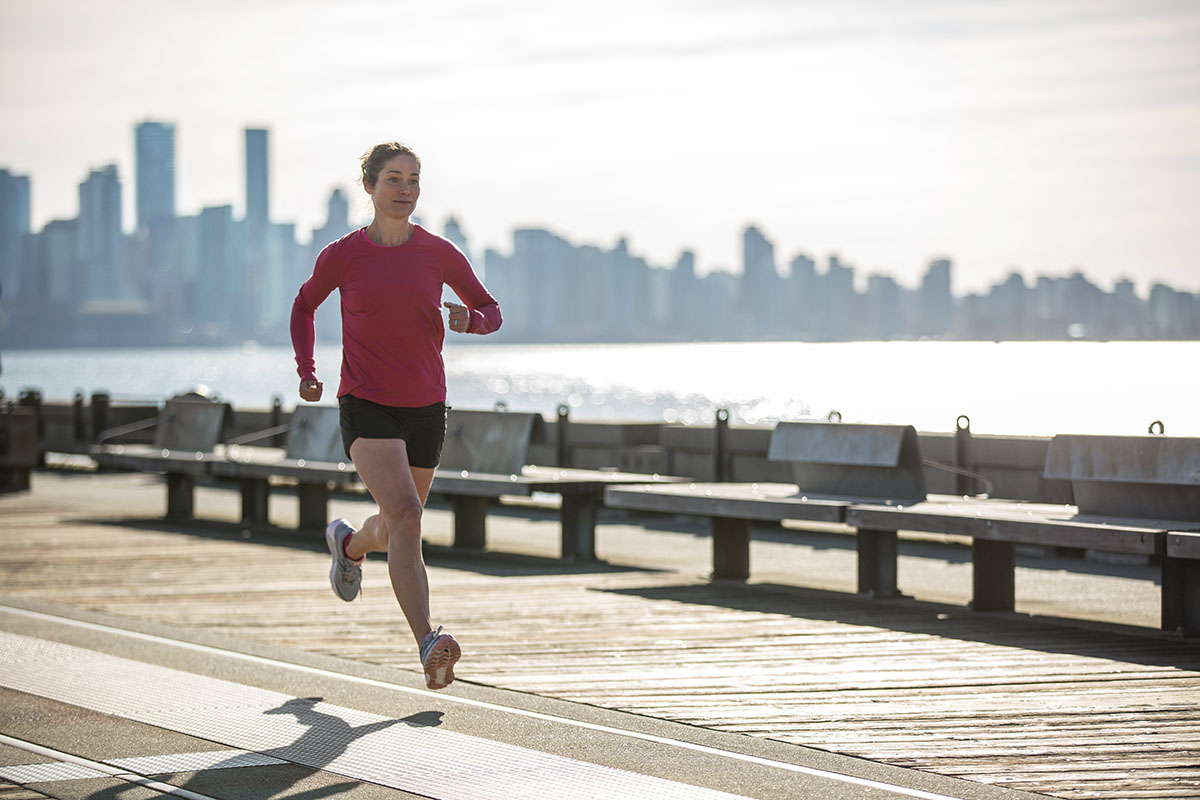 The Guide ISO 2 is Saucony’s leading stability shoe, meaning it offers a bump in lateral support compared with neutral options. To accomplish this, Saucony designed the shoe with a dense foam “post” along the instep, which is meant to help those who overpronate (when the feet roll inwards while running) by leveling out each foot strike. I tend to use a mix of neutral and stability models, and have found the Guide ISO 2 to be an unobtrusive yet effective design. I appreciate its added structure for boot camp and circuit training, which include a fair amount of lateral movement, and I’d even consider taking these shoes off the pavement into more uneven terrain (within reason). Those with significant overpronation issues may want a shoe with even more support, including Saucony’s own Omni ISO 2. 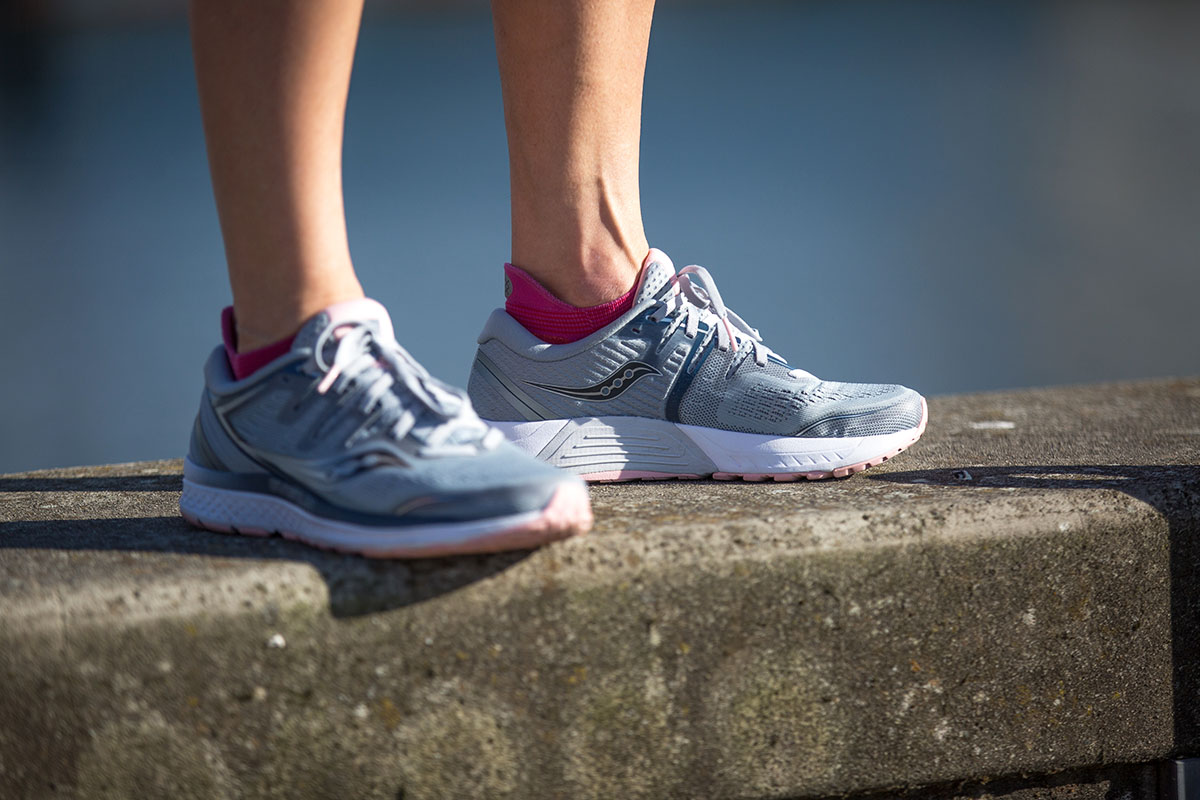 At 18 ounces per pair for the women’s shoe, the Saucony Guide ISO 2 is fairly average among its competition. Our favorite stability running shoe this season, the Brooks Adrenaline GTS 19, comes in slightly heavier at 19.2 ounces per pair. The highly cushioned Hoka One One Gaviota 2 is a bit lighter at 17.6 ounces but lacks responsiveness compared to the Guide. In-house, Saucony has a number of other stability options including the Omni ISO 2 (19.8 ounces) and Hurricane ISO 5 (20.2 ounces), among others. All things considered, the Guides’ weight is perfectly reasonable, and they’ve never once felt sluggish on the road. 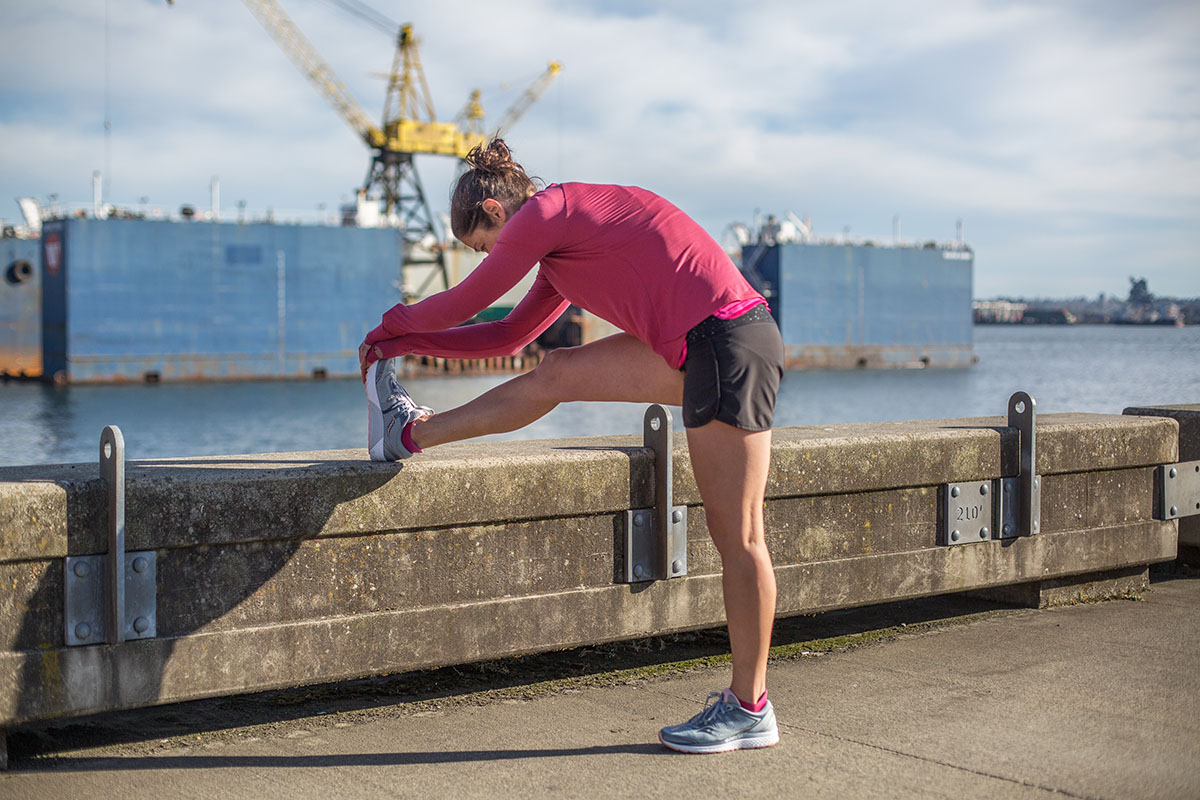 The Saucony Guide ISO 2 has effectively withstood all of its testing over the past couple months, including many miles on both pavement and crushed gravel and rocks. However, two pairs of past-generation Guides fell notably short in this area. As with the newer model, the toe box on the older versions is shallow, causing a pressure point where my big toe meets the top of the shoe, which can eventually lead to a hole in the mesh. In my decades of running, I’ve never had this happen with any other running shoes. I haven’t torn through the upper on the Guide ISO 2 yet, but I anticipate it will wear down the same way as the miles rack up. 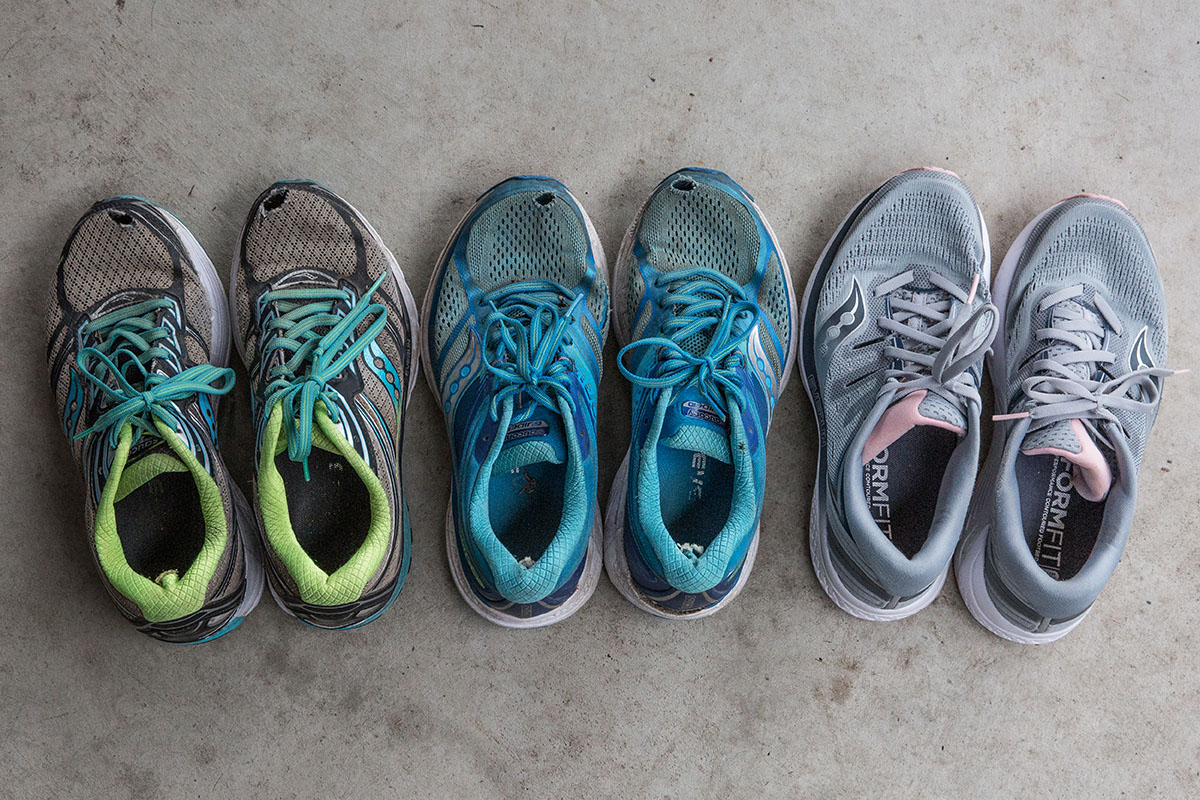 As I touched on above, I had issues with the fit of my previous Guides, so I spent significant time trying on the Saucony Guide ISO 2s. I tested both a women’s 8.5 (my usual size) and 9 on a treadmill at my local running store, but the 8.5 proved to be the better length with enough room at the end of the shoe. However, while the toe box is wide enough, it’s notably shallow and causes pressure at my big toe—just as it did on my past two pairs. Some might not experience the same problem, but I’m certain it isn’t due to wrong sizing. 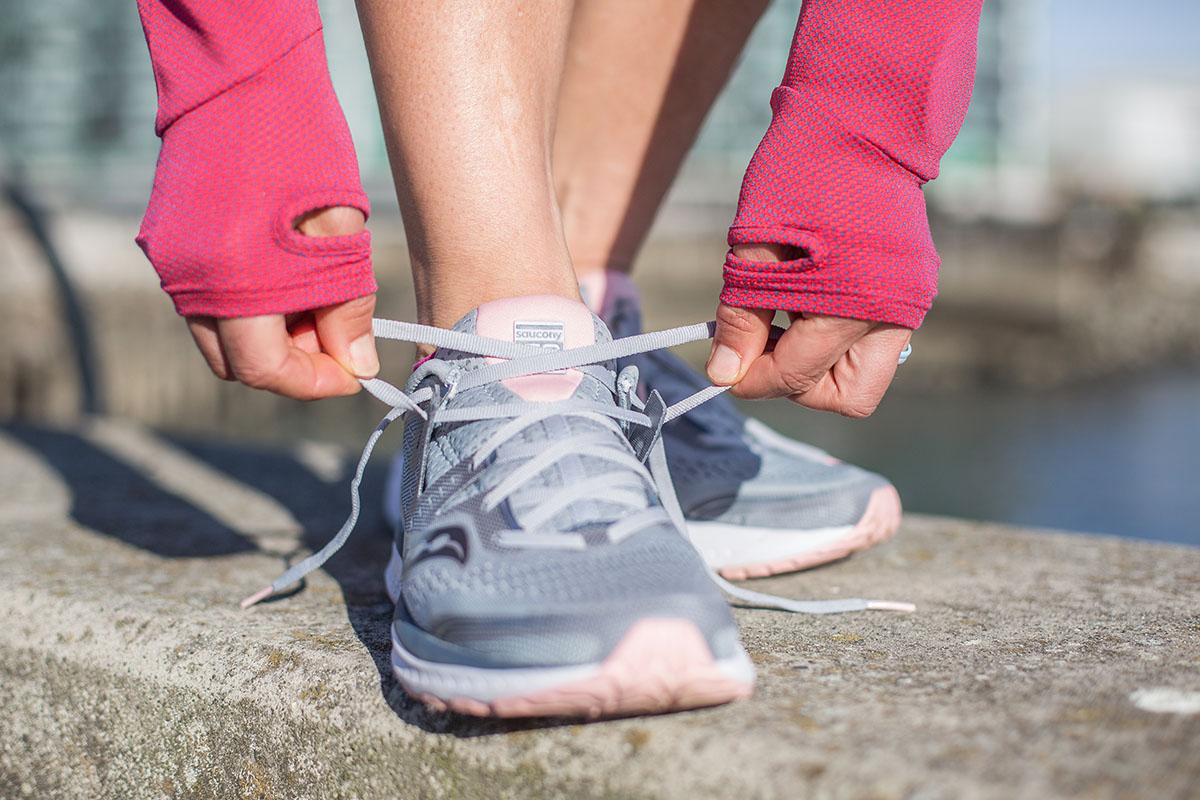 We put the women’s Guide ISO 2 through its paces on pavement and gravel, and Saucony makes the shoe in a men’s version for the same price. The men’s Guide ISO 2 is slightly heavier at 20.6 ounces per pair, but otherwise features an identical build and construction, including Saucony’s unique midsole/topsole design, reflective heel, and ISOFIT system. Like the women’s model, the men’s is also available in a wide array of colorways (nine at the time of publishing) and size options (men’s 7 through 16). 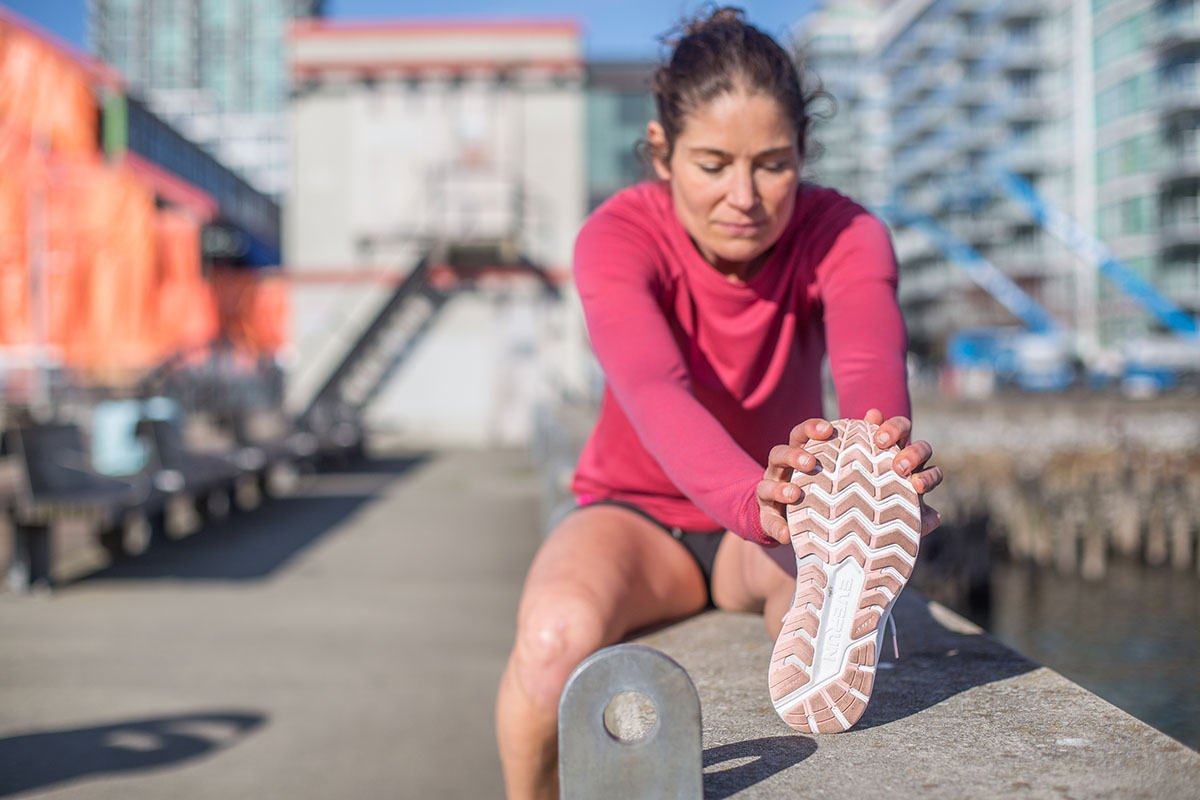 Saucony’s Guide ISO 2 is a stability shoe that nicely balances support and performance, which is an impressive feat. In the same category, the Brooks Adrenaline GTS 19 is also intended for runners who overpronate or who need a step up in lateral stability over neutral designs. As we mentioned above, the Adrenaline is our top stability pick this season for its effective support system, plush cushioning, and high-quality build. However, it lacks some responsiveness compared to the Guide ISO 2 and also comes in about an ounce heavier at 19.2 ounces per pair. Both are great options for those that overpronate, but the Adrenaline’s superior comfort, more accommodating toe box, and well-rounded design give it the overall edge. 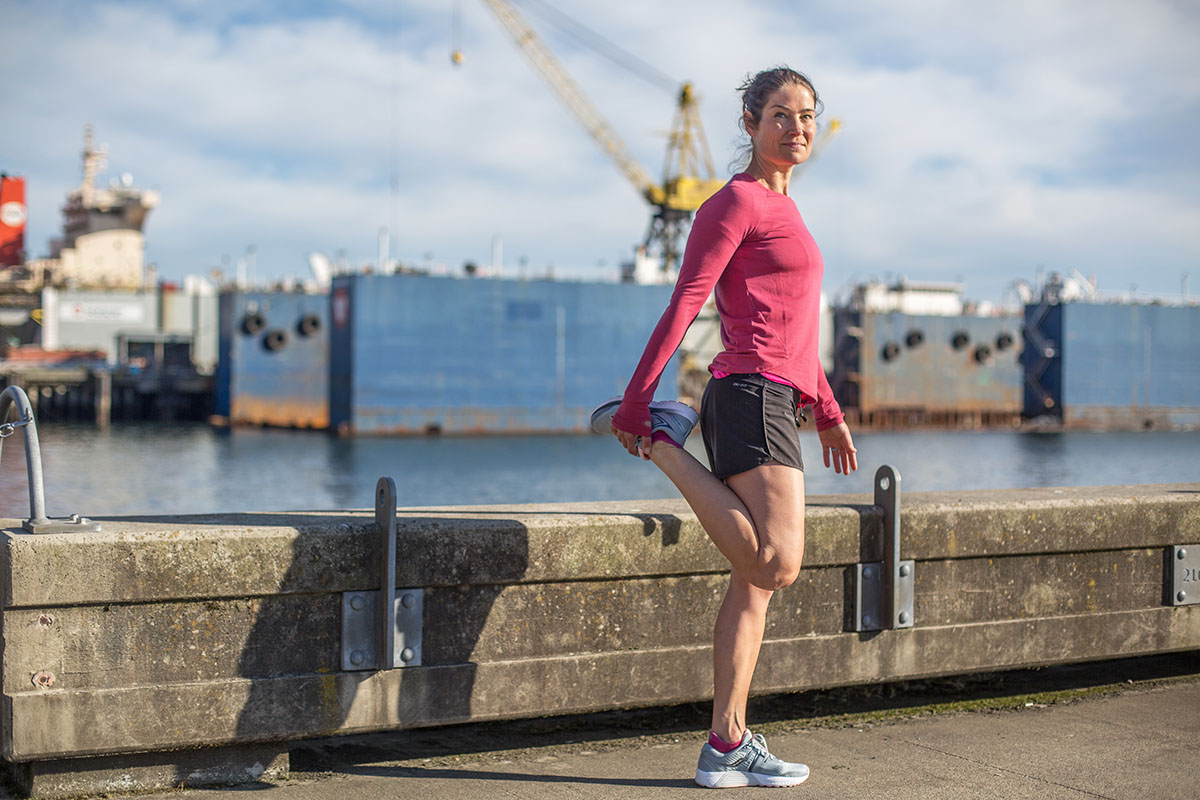 Another stability shoe to have on your radar is Hoka One One’s Gaviota 2. As we’ve come to expect from Hoka, the shoe has a super-cushioned and soft ride that excels for recovery runs and over long distances. And like the Guide, it features a mostly unobtrusive support system that includes a beefed-up midsole and reinforcements in the upper for compensating for overpronation. But what gives the Saucony the advantage for us is its superior energy transfer and $30-cheaper price tag. Provided you don’t have an issue with the shallow toe box, the Guide ISO 2’s lighter and faster feel makes it more fun over short distances and for circuit training.

Within Saucony’s own lineup, the Omni ISO 2 and Liberty ISO 2 are well worth considering. As the names indicate, all three stability shoes include Saucony’s customizable ISOFIT system. In breaking down the differences, the Liberty is the lightest and least supportive of the bunch with only moderate stability and a soft, knit upper. The Omni is the most stable of the three and also the heaviest at 19.8 ounces (the Guide is 18 oz. and the Liberty is 17.8 oz.). In the end, the Guide lands comfortably right in the middle: it’s reasonably light and fast, affordable at $120, and versatile enough for runs ranging from sprint workouts to 10+ mile jaunts. 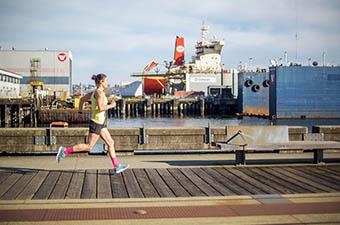 Running is among the most approachable forms of fitness, requiring only a pair of quality shoes to get you going. But the sport’s widespread popularity has led to a dizzying array of shoe brands, styles, and available features. Below we break down our... 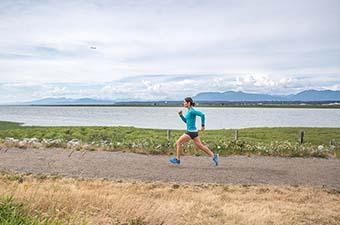 Asics is one of the most recognizable names in road running, and the Gel-Cumulus is a standout in their lineup of neutral shoes. Now in its 21st iteration, the newest model builds off of the outgoing “20” with... 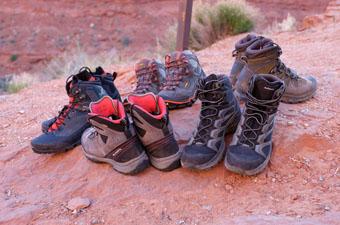 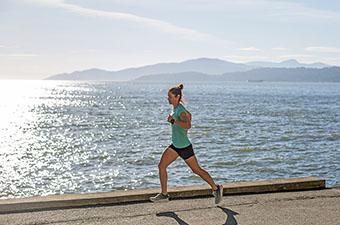 For spring 2019, Hoka One One has revamped their popular Clifton road runner. Notable changes for the sixth iteration include a lighter build and redesigned upper and tread pattern... 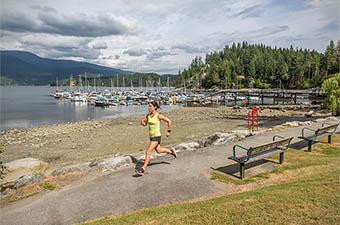 The recently released Torin 4 is Altra’s latest addition to their popular road-running lineup. Building off of the outgoing 3.5, the new model incorporates an upgraded midsole, lower stack height, redesigned mesh upper and tread, and lighter-weight... 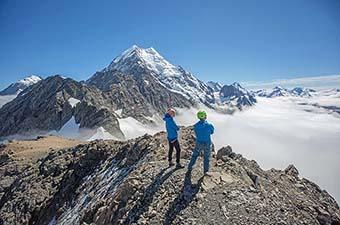 I wake at the crack of dawn. Only the faint outline of Aoraki/Mount Cook is visible from my bunk, but its sheer volume is enough to pull me from my sleeping bag. I eagerly nudge Brian awake and we tiptoe outside... 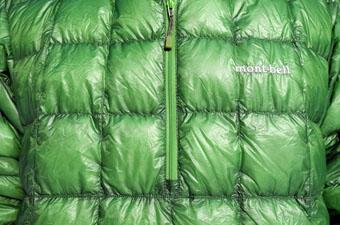 As the weather cools down each year, the great down-versus-synthetic insulation debate heats up. Goose and duck down fill are among the premier insulators on earth, trapping air and creating pockets of warmth around your body with very little weight...